The Australian Hawkei Light Protected Vehicle 4×4 is part of a wider project to replace the Australian Defence Force’s fleet of transport vehicles, Project Land 121 Phase 4 – Protected Mobility Vehicle (Light) or PMV-L, called for up to 1,300 specialised light armoured vehicles and unprotected light vehicles to be used in place of Land Rovers or G-Wagons.

A number of international vehicles were considered, however in December 2012 Thales Australia’s Hawkei light protected vehicle won Australian Government funding for further development and is now the front runner to win the program..

Thales teamed up with the well established and respected Israeli company Plasan to provide the protection for the new vehicle, which includes their famous Plasan composite and a v-shaped hull reportedly providing greater protection than STANAG 4569, Level 1. Other leading companies who are working with Thales on the new vehicle include Boeing, PAC Group and a further 120 Australian firms will be part of the manufacturing supply chain.

A number of prototypes have been built and have completed more than 40,000km in vehicle testing. They have been subjected to more than 10 blast tests to prove the protection levels of the crew compartment.

In 2013 Thales delivered six Hawkeis to the Australian Department of Defence under Stage 2 of the Manufactured and Supported in Australia option of Land 121 Phase 4.

The vehicles, comprising two Command, two Utility and two Reconnaissance variants, plus a trailer, which have been subject to an extensive 130,000 km testing programme.

The Hawkei vehicle family will include the Following: 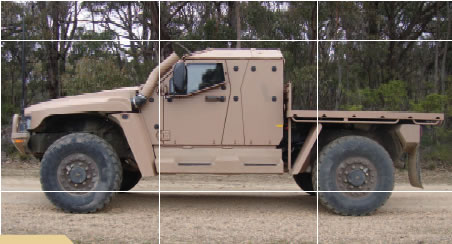