During the cold War it was normal for NATO member countries to field Self Propelled Guns of varying size. NATO following its formation,  started to issue Standardization Agreements aka STANAG. The purpose is to provide common operational and administrative procedures and logistics, so one member nation’s military may use the stores and support of another member’s military.

One of these STANAG’s was introduced to standardised the size of the muzzle calibre of medium artillery & SPG’s to 105mm. This meant that the existing British Armies artillery did not conform to this STANAG as they were smaller than 105mm.

A new vehicle was urgently required. During the early 1960’s a series of vehicles were developed on a common chassis and engine, called the FV430 series, for the British Army. It used a 240bhp Rolls-Royce Multi-fuelled engine, giving a top road speed of 50km/h and operational range of 395km.

The  Abbot Self Propelled Gun was developed on the FV430 chassis. It proved perfect for mounting a turret with a 105mm howitzer, rather than trying to develop a completely new vehicle from scratch. The first prototype was completed in 1961.

A new main gun was developed at the Royal Armament Research Centre, however it couldn’t fire the US M1 series of rounds, so a new main gun was developed called the QF Gun L13, that could fire the US rounds. Production started at the Vickers Armstrong plant in Newcastle-Upon-Tyne and the first vehicles entered service with the British Army in 1965. 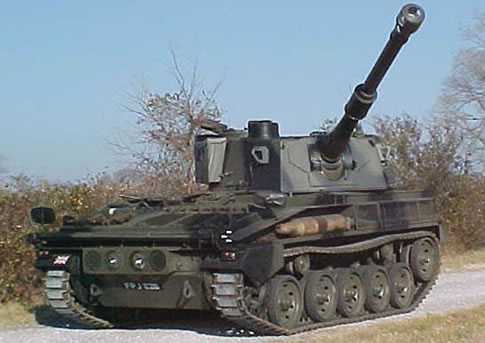 The L13 had a fume extractor and muzzle brake and semi automatic breech with a power rammer. The turret had a 360 degree powered traverse and the main gun was manually elevated from -5 to +70 degree’s. It could fire High Explosive rounds to a maximum range of 17.3km and could fire HESH for close encounters. A top rate of fire was 12 rounds per minute.

By 1990, the British Army had 151 Abbots in service, based in Canada (Batus training grounds), the UK and West Germany. It was replaced in service with the British AS-90 155mm SPG.

India. In 1967 a version designated the “Value Engineered Abbot” entered production and 68 were ordered by India. The version lacked the go-faster stripe accessories the British Abbots had such as NBC protection and night vision.