The Argentinean Army had the restrictions of limited logistical mobility when sourcing their new tank, so it  had to be less than 33 tonnes, which ruled out a well armoured Main Battle Tank.

So a lighter armoured fighting vehicle capable of a top road speed of 70 km/h, a minimum operational range of 500 km and able to be fitted with a respectable anti-tank gun.

In 1974 Argentinean engineers worked with German defence manufacturer Thyssen-Henschel on the development of a new medium tank based on the new (at the time) German Marder 1 Infantry Fighting Vehicle design.

A new low profile turret based on the Leopard 1 tank was built mounting a l05mm main gun. The Marder 1 chassis design had to be reinforced to cope with the stresses generated by the recoil of the 105mm gun when fired and additional weight.

Two prototypes were built in 1976/77 and shipped to Argentina for trials followed by a third. Tanque Argentino Mediano , (translated in to English is “Argentine Medium Tank”) AKA TAM passed its field trials and entered licensed production in a new TAMSE plant, built for the purpose in 1979 in Argentina.

Despite their being a number of more modern armour systems in production & service at the time, the TAM was built on older methods of armoured protection – low silhouette and well slopped steel plate. The Glacis (the front of the hull) is a 75 degree angle and reported to be 50mm thick. The sides are 32 degrees as is the turret and is reported to be 50mm thick (turret). The vehicles speed and operation on home soil is also considered to be a further asset in its survivability.

The layout is standard with the commander and gunner in the right of the turret, loader AKA operator on the left, with the driver in the front left of the hull and the engine to his right. This MTU MB330 Ka 500 supercharged 6 cylinder diesel develops 720hp with a power to weight ratio of 24.27hp/ton and a top road speed of 75km/h. It uses a RENK AG HSWL-204 automatic transmission.

It has an operational range of 590km which is increased to 940km when equipped with two additional rear fuel tanks. It uses the older torsion bar type suspension.

The TAM tank is equipped with a 105mm rifled cannon. Though the tradition of using the British L7 cannon was adopted during development, this was shortly replaced with the Rheinmetall Rh-105-30 105 mm which is the improved L7A3. It was built under licence in Argentina and designated the FM K.4 Modelo 1L and can be elevated to 18 degrees or depressed to -7 degrees. Like all rifled cannons, it can fire HEAT or HESH rounds. It can also fire the M735A1 APFSDS round which is reported to be able to penetrate 370mm of steel at up to 1000m.

For close encounters it’s equipped with 7.62mm FN MAG 60-40 coaxial MG & a FN MAG 60-20 on the turret roof for the Anti-Aircraft role. It can carry 6000 rounds of 7.62mm and 50 rounds of 105mm. It has a modern (ish) fire control system, but lacks any type of hunter killer capability or integrated digital communications/battlefield management system. It has a laser range finder, ballistic computer and a PERI-R/TA panoramic periscope with a 2x and 8x zoom by Zeiss for the commander. 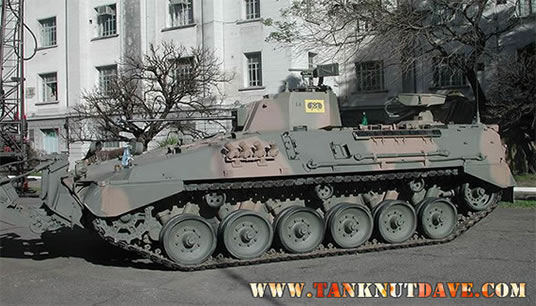 Though Argentina had some limited success licence building French APC’s and the purchase of a limited number of M113’s from the US, there still remained a need for not only the TAM but off a modern IFV which was also subject to the same restrictions/requirements of the TAM. So three prototypes were built alongside of those of the TAM and also sent to Argentina as well for field trials. 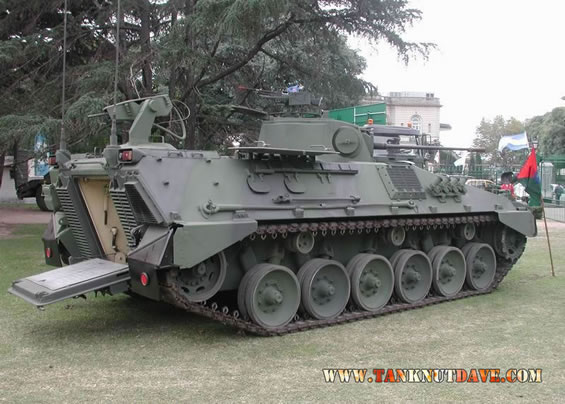 Its principal offensive capability is a 20mm auto cannon mounted in a two man turret. Again a 7.62mm FN MAG 60-40 coaxial MG & a FN MAG 60-20 on the turret roof for the Anti-Aircraft role are fitted with an additional 7.62 mm MG mounted on the rear of the hull which is electronically controlled from with in the vehicle. It can carry 880 rounds for the auto cannon, including armour-piercing DM63 rounds. It has a three man crew and can carry 10 fully equipped infantrymen who are able to fire their weapons through ports from within the vehicle and access is through a traditional ramp exit in the rear of the vehicle. 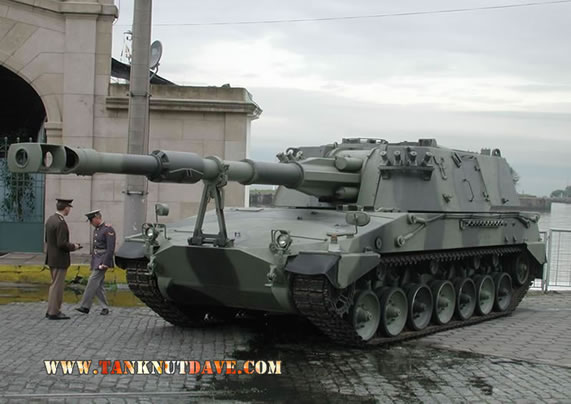 The vehicle is a lengthened TAM hull (chassis) with a Palmaria self-propelled howitzer turret developed by Oto Melara specially for export. The turret houses the 155mm (Calibre L39) howitzer and its automatic loading system (the charges are loaded manually). It can fire all standard NATO 155mm ammunition, including HE-FRAG, smoke or illumination projectiles, with an effective range of 24.7 km and 30 km with rocket-assistance. A total of 30 rounds are carried. Oto Melara
Manufactured only 20 turrets and its believed a total of only 15 VCA 155 were manufactured.

The vehicle is a internally mounted AM-50 120mm mortar, with an effective range of 9500m and a rate of fire of 8 to 12 shots per minute. Numbers built are not clear, but estimated at 50.

This vehicle is the command and control variant and a lot is not known about it. 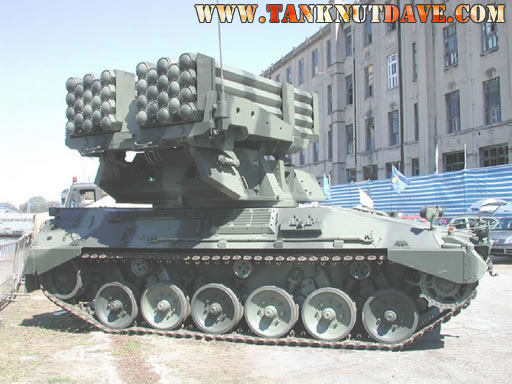 Argentina worked closely with Israel on this vehicle, mounting their LAR-160 modular rocket launcher mounted on a TAM chassis AKA VCLC-CAL. The launcher was made up off 2 modules each containing 18 rocket tubes, which were sealed after manufacturing each with a 160mm HE-FRAG or cluster warhead. The modules are reported to have a 15 year shelve life. The VCLC-CAM was also an Israeli launcher with 4 tubes housing Israeli 350-mm MAR-350 rockets with an effective range of 90+ km. Its believed only one of this vehicle was built for field trials. Only a handful of VCLC-CAL’s were built, but never saw active service due to their costing.

A combat ambulance variant, again not much is known about it, but did not reach anything further than the prototype stage.

This variant was the Armoured Recovery Vehicle for the TAM series, but did not reach anything further than the prototype stage.

There was a lot of umming and erring with exports of the vehicle. Deals were signed with Malaysia, Peru, Panama, Iran and Ecuador (field trials) through out the 80’s, but for various reasons all the deals collapsed and Argentina lost out on the important export revenue many countries rely on to lower the manufacturing costs for their own fleet and subsequently the original order of 512 vehicles (200 tanks and 312 VCTP) was reduced. 200 TAM tanks, 216 VCTP and VCPC were manufactured for the Argentinean Army over a prolonged production period of 1979 – 1983 and 1994 – 1995. The vehicle is no longer offered for sale as TAMSE has gone out of business.

The TAM has not seen any active combat, but it was deployed in the following years on UN peacekeeping duties in the former Yugoslavia.