India has had a tense relationship with neighbouring Pakistan and the two countries have gone to war four times, in 1947, 1965, 1971 and 1999. India has relied heavily on the supply of military technology from Russia, which has included the BM-21, 122mm MLRS system.

However Pakistan uses the system too, so India looked to its own  Defence Research and Development Organisation (DRDO) to come up with a system that could out gun the BM-21.

This of course meant a larger rocket and a 214mm was selected. This gave a range of 40km (its reported that a 120km is in development) and a 250kg warhead could be added.

Development of The Indian Pinaka MLRS started in 1986 and it served in the Kargil War in 1999 where it lived up to its name “Pinaka” which is the bow of Shiva, the Indian Supreme God.

Pinaka is a complete MBRL system, each Pinaka battery consists of:

The first Pinaka regiment was raised on February 2000. Presently, three regiments of Pinaka are in service. The Indian Army intend to increase this with an additional number of regiments of the Pinaka during its next planning period (2012–2017) as the older Grad MLRS regiments are retired. 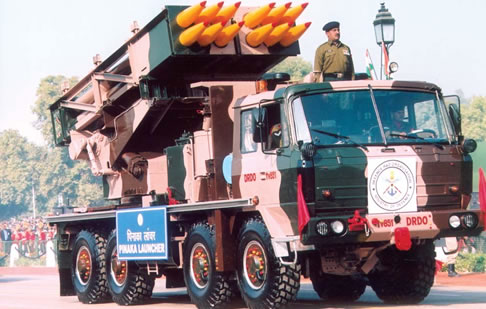 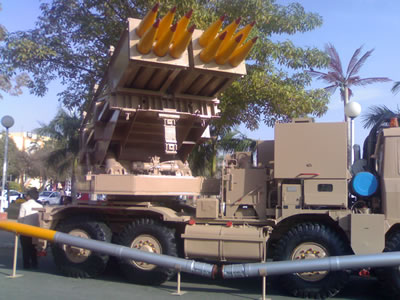 Based on a Kolos Tatra truck for high mobility and license manufactured by BEML.
The truck features a central type regulation system; the driver can adjust the tire pressure to suit the terrain for optimum mobility.
Two rocket pods per launcher, with a total of twelve rockets between them.
A total of six launchers per battery.
Launchers are NBC protected, have their own computerized fire control system, and automatic positioning system.
The Pinaka system and the launchers are designed for shoot and scoot fire missions thanks to the use of an inertial navigation system SIGMA 30.
A battery of six launchers can neutralize an area of roughly 1000 * 800 meters at 40 km range.
The launcher assembly has electromagnetic elevation and traverse, with traverse being 90º left and right of the centerline and elevation up to 55º
Rate of Fire for a complete salvo from a launcher is 44 seconds.
Salvo Reload time is 4 minutes.