The MT-LB is one of the unsung successes of Russia’s inventory of armoured military vehicles. Originally developed in the late 60’s as a tracked vehicle capable of towing 6.5tons of artillery gun across the battlefield, it has a rear section for transporting the crew of the towed artillery piece, which gave them armoured protection from small arms fire and counter battery fire (the enemies artillery firing on yours).

The ability to carry troops has seen the vehicles roles expand to not only its now most common, being the APC, but ambulance, tank destroyer and command vehicle, to name a few, with licensed production in Bulgaria and Poland, only to be exported to other nations outside the Former U.S.S.R. and re-classed as a multi-purpose tracked vehicle.

MT-LBU – Command vehicle with additional radios, generator, land navigation system and canvas structure that extends from the rear for additional space for briefings.

As a former licensed manufacturer of the vehicle, roughly around 200 vehicles still remain in service with the Polish Army, including electronic warfare vehicle and are slowly being withdrawn from service. This vehicles serve along side the Polish Opal, which is a highly modified MT-LB and entered Polish service around 1995. Vehicles include Hors (Reconnaissance) Durian (engineer, tows a trailer that fires a mine breeching system to blast a way though mine fields to clear a path) Kroton (engineer vehicle that blows out mines from tube launchers to lay mine fields) Lotos (ambulance). 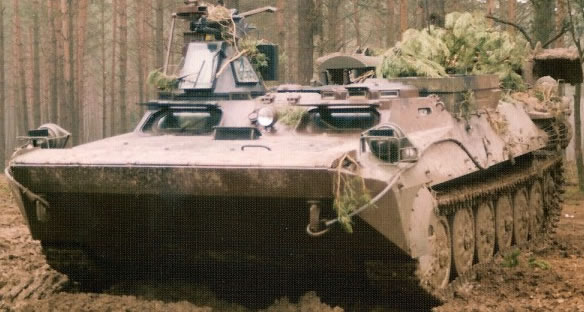 The Opal has a reshaped front, water propellers at the rear for increased amphibious capability, a new small turret on the APC versions with a 12.7mm MG and a small increase in Horse Power.

Bulgaria built under licence (since 1972) the vehicle in various variants, to not only serve (and still is) as Bulgaria’s principal APC but was sold to the former Iraqi Army, who operated it in the 1991 Gulf War. A total of around 2300 vehicles have been built. It is the countries principal APC and has been built in other roles.

Sweden purchased MT-LB’s from the former East German Army in 1993, following its disbandment. These vehicles were upgraded to meet Swedish standards. In August 2010, Sweden signed an agreement with Finland for the purchase of 113 new 8×8 wheeled AMV vehicles to replace various vehicles in current service, including the MT-LB’s from 2014 onwards.

The Ukraine was the original manufacturer (The Malyshev Factory) of the MT-LB for the former USSR. The Ukrainian Kharkiv Morozov Machine Building Design Bureau has developed an upgrade package for the vehicle.

This is an installation of an armament module comprising a ZTM-1 30mm chain  gun, 7.62 mm machine gun with two new sights, as well as a smoke/aerosol screen laying system.