The Russian TOS-1 MLRS is a Multiple Launch Rocket System designed for short range engagements (400m to 5000m) in support of tanks and troops, hence the launcher being mounted on a T-72 tank hull, so that  it can match mobility and protection of the AFV’s it is fighting along side of.

TOS doesn’t fire the standard HE-FRAG other MLRS do, but rather thermobaric warheads, which includes the type known as a “fuel-air bomb” and why its called a heavy flamethrower system. It is an explosive weapon that produces a blast wave of a significantly longer duration than those produced by condensed explosives. This is useful in military applications where its longer duration increases the numbers of casualties and causes more damage to structures. It can be detonated in mid air or on contact.

Designed by the Russian Omsk Transmash Design Bureau, the vehicle has a three man crew, commander driver and gunner who operates the Fire Control System. The launcher is made up of 30, calibre 220mm firing tubes. A single or pair of rockets can be fired within 0.5sec’s or a full salvo within 15 seconds and can cover an area of 200 x 400m.

The TOS-1 is supported by a TZM reloading vehicle. It too is based on a T-72 hull and has a crane to load the spare rockets it carries in to the launcher.

Entering service with the Russian Army in 2001, the vehicle uses a new T-72A hull and has a new launcher. It can be identified by having a rectangle shape and only 24 firing tubes, where as the older model has pitched sides at the top of the launcher. The launcher is also longer to accommodate the new rockets which have an increased range of now 6000m. 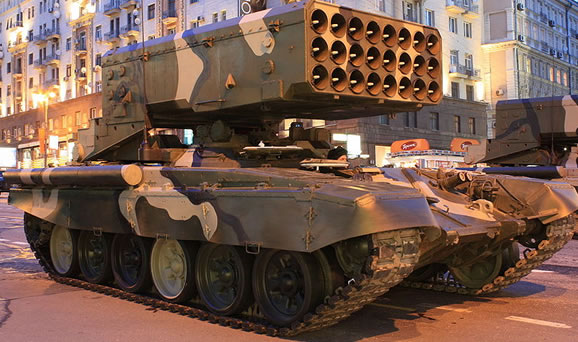 The larger rockets has also meant a new TZM reloading vehicle, designated TZM-T has been developed. The vehicle saw action in the Second Chechen War.