IVEMA (International Vehicle and Equipment Marketing Ltd)  is a Southern African firm who develop MRAP type vehicles, the most famous being the 4×4 GILA MRAP.

IVEMA was established in 2000 and in late 2005 the GILA design had finished its development.

The GILA Armoured Personnel Carrier and Battlefield Ambulance are currently in service with seven African defence organizations, which includes the 2009 selection by Canada to supply countries being deployed under the United Nations in the Darfur Province of Sudan.

IVEMA has designed and developed a range of weapon mounts and light turrets, these are those pictured on the GILA MRAP: 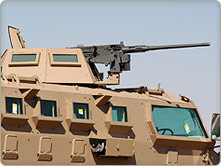 IVEMA’s light turret is electrically driven with a manual override and can accommodate 7.62mm, 12.7mm and 20mm machine guns. 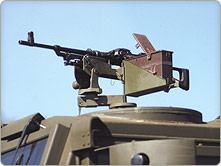 The single mount is a light weight, hard mount system for the 7.62mm SS-77 light machine gun.  The system can be used as a primary or secondary weapon system for vehicles and boats. 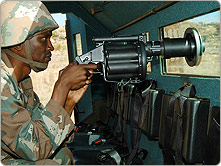 The MGL Gimbal Mount is a lightweight, recoil buffered soft mount system specifically developed & qualified for the Milkor 40mm MGL series of launchers. The system can be used as a primary or secondary weapon system for vehicles. 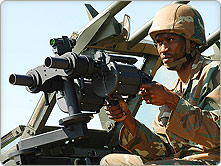 The MGL Double Mount is a lightweight hard mount system.