The Swedish SEP 6×6 & 8×8 Wheeled Family of Armoured Fighting Vehicles (Splitterskyddad enhetsplattform), was developed by Swedish Firm: Land Systems Hägglunds AB, for the Swedish Army. Development focused on two key area’s, its specialised mission modules which are interchangeable on a basic chassis and a hybrid diesel-electric drive.

Traditionally Armoured Fighting Vehicles are propelled by an engine, which produces the power and a power transmission system, which provides controlled application of the power from the engine to the wheels/tracks. The transmission has normally been an assembly of mechanical parts including the speed-changing gears and the propeller shaft, which is connected to a live axle and in turn connected to the wheels/tracks.

The disadvantage with these systems, is they are bulky taking up space on the vehicle, mechanical parts are prone to breaking and malfunctioning, they have to rely on one source of power (the engine), parts are costly to replace, are not always fuel efficient and are noisy, so draw attention to the vehicle.

SEP addressed all these issues by using a Diesel-electric transmission.

How does this work?

The vehicle still has a traditional diesel engine, however it uses two. These are connected to ZF electrical generators. The generators produce electricity. Each of the road wheels has a permanent magnet type electric motor in its hub. The transmission is electrical cables which transfers the electricity directly from either the ZF generators or the onboard batteries, which are charged by the generator when they are flat.

Using a cabled transmission instead of a mechanical one, saves on space, maintenance and breakdowns as well as weight.

Using electrical motors in each wheel means the vehicle can run on its batteries. This offers a reduction in noise giving the vehicle a stealth capability behind enemy lines. It also means that if the diesel engines fail, the vehicle is still drivable by relying on the batteries.

The vehicle is comprised of a basic chassis. The front section has a cab where the driver and engine are located. The rear of the chassis is where the specialised mission modules are mounted. There is a module for each of the following variants:

The basic chassis can be fitted with either rubber tracks, x6 wheels or x8 wheels.

A layer of modules is fitted across the vehicles front and sides covering the forward cab and specialised mission module. These can be fitted with various compositions of armoured ceramics or other more sophisticated Hard Kill Systems.

The vehicle has been fitted with German Firm IBD Deisenroth Engineering hard kill system called AMAP-ADS thanks to a cooperation between IBD and the vehicle manufacturers.  The system is called the Active Armor Concept (AAC).

In April 2008 a live demonstration of the AAC fitted on a SEP 8×8 proved the system to be successful, after the vehicle was subjected to Machine Gun fire and activated when two RPG’s were fired (one after the other) at it. The vehicle then drove up to VIP stand where they could see the two empty countermeasure modules and the only vehicle damage being some black charred marks from the modules activating.

The vehicle can be fitted with a Remote Weapon Station as well as various weapons as part of the specialised mission module, such as mortar.

Development work started in 1996. The first prototype delivered to the Swedish Army was the tracked version (it uses rubber tracks) in November 2000 for trials and evaluation and by 2003 the vehicle had covered over 2000km’s in various trials.

Development of the wheeled version of SEP started in November 2001. A 6×6 prototype (pictured above) was delivered to the Swedish Army in 2003.

In 2003 a second tracked SEP test bed vehicle was ordered and delivered during November 2005.

During 2006 Land Systems Hägglunds AB merged with BAE Systems Bofors and named BAE Systems AB. The new named company is still based in Sweden and is a subsidiary of BAE Systems.

In January 2006, SEP was selected as a candidate vehicle in the British Army trials for a new utility vehicle under the FRES program, which were held in 2007.

A contract for final development was placed by Sweden in July 2006. A further two tracked and two 6×6 wheeled vehicles were built under the contract.

An 8×8 wheeled SEP prototype (pictured above) was completed in February 2007. This vehicle was the one used in the AAC demonstration. 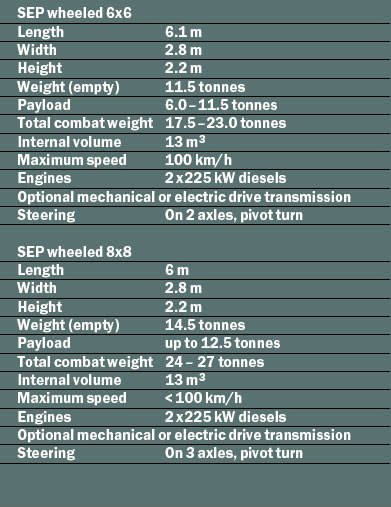 It had been hoped that the SEP would be selected by the British Army for its FRES program, which would have bought in a much needed cash injection in to the development of the vehicle, reducing the burden of Sweden having to develop the vehicle family on its own. However in July 2007 the vehicle was not selected for further trials.

In February 2008, the Swedish Armed Forces announced the cancellation of the SEP programme. The reasons stated were a ‘lack of an international collaborative partner’ ie it couldn’t meet all the development costs on its own due to defence cuts, otherwise SEP would have entered service with the Swedish Army in 2014. Instead it purchased the Patria AMV 8×8, which is being built under licence in Sweden.

In February 2009, BAE Systems announced a teaming agreement with Kongsberg Devotek of Norway to develop new gears and transmission for the SEP.

No orders for the vehicle have been placed and development has now ended and been switched to the Alligator.