The Republic of China (ROC), commonly known as Taiwan, is a state in East Asia located about 180 km (111.85 miles) off the east coast of mainland China with whom they have an ongoing dispute with over independence, but has been left with limited formal diplomatic powers.

As an island nation its biggest threat comes from the sea, be it an amphibious invasion or ship launched missiles. The Taiwanese RT2000 wheeled MLRS AKA Thunderbolt-2000 AKA LT-2000, was developed and manufactured by the Taiwanese Chungshan Institute of Science and Technology, as a highly mobile (hence being developed as a wheeled vehicle) Multiple Launched Rocket System that can rock up to the Taiwanese coastline and launch missiles at enemy inbound amphibious landing craft and other warships.

Series production of the The Taiwanese RT2000 wheeled MLRS began with an initial order for 100 systems placed in mid-2000, but delays were encountered because of structural problems with the launcher unit. In early July 2003, it was announced that those problems had been solved and testing successfully completed. The 2005 budget included USD19 million for RT2000 systems. It has been reported that 57 vehicles have been ordered with full operational capability in 2011.The RT2000 is based on an Oshkosh M977 8 × 8 truck chassis. 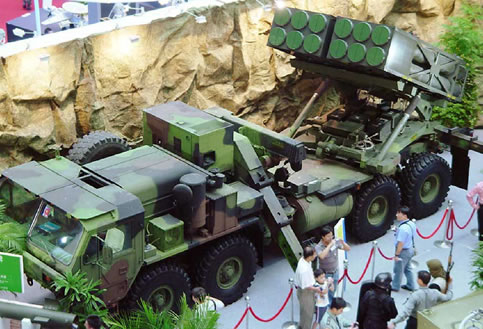 The system fires 3 missiles that have been developed in Taiwan. They are referred to by Mk, with the numeric number being the range of the missile in Km’s.

All three rockets have solid propellant motors and are stabilised in flight by four fins that fold out after launch. On each, the front-mounted warhead can be either of the high-explosive or sub-munition. These are fired from pods (2 pods are mounted in the launcher) and when the pods are empty, they are replaced with a fresh pod, which are loaded in to the launcher via a crane on the vehicle.