The Ukrainian BTR-3U Guardian Infantry Fighting Vehicle has been developed in 2000-2001 by an international consortium. The companies involved in the project include the Kharkiv Morozov Machine Building Design Bureau of Ukraine, the ADCOM MANUFACTURING Company Limited WLL of Abu-Dhabi, UAE, and the State Scientific Technical Centre of Artillery & Rifle Arms of Ukraine.

The main structure – Design and lay-out principles of the vehicle were determined by the ADCOM MANUFACTURING Company, acting as the whole project coordinator, while the Kharkiv Morozov Machine Building Design Bureau was responsible for the development of the chassis and integration of all vehicle systems and weapons on the chassis (development of the designer documentation). The BTR-3U is also designated as the Guardian. Although somewhat similar in appearance to the Russian BTR-80, the BTR-3U is an all-new production vehicle rather than upgrade of the existing in-service vehicle.

The troop compartment – Accommodates six troops who enter and leave the vehicle by a door in either side of the hull. The lower part of the door folds downward to form a step, with the upper part opening forwards. There are also hatches in the roof and firing ports with associated vision devices provided in the sides and front of the vehicle. An air conditioning system is fitted as standard to ensure crew comfort in hot conditions.

Six 81mm electrically operated smoke/aerosol grenade launchers are mounted three either side of the turret rear and firing forwards.

The sighting systems – Include a commander’s 1PZ-3 observation periscope and a TKN-4S Agat stabilised sight which is integrated with the missile fire control system.

The standard equipment – BTR-3U also includes hydraulically amplified powered steering on the front four road wheels and a central tyre-pressure regulation system that allows the driver to adjust the tyre-pressure to suit the terrain being crossed. The BTR-3U is fitted with French Michelin tyres.

The BTR-3U power pack – Is a Deutz BF6M1015 diesel developing 326 hp coupled to an Allison MD3066 fully-automatic transmission. The power pack and transmission are fitted by the Kharkiv Morozov Machine Building Design Bureau. The vehicle is fully amphibious, propelled when afloat by a single water jet mounted at the rear of the hull. To prepare the vehicle for water, the driver erects a trim vane and switches on the bilge pumps from within the vehicle. The powerpack compartment is fitted with an automatic double-action fire extinguishing system. 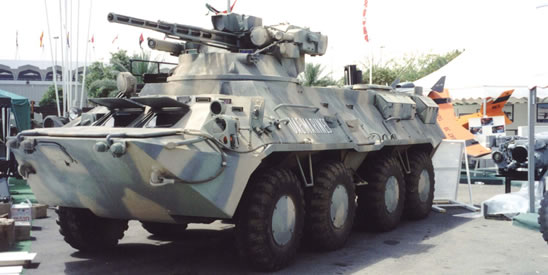