The light tank had seen service during WW2 by all sides and proved useful as they could be air lifted on to the battlefield and were well suited as anti-infantry vehicles. However to reduce the weight of the vehicle they were thinly armoured and were not able to effectively hold ground against other heavier tanks, so were used in the reconnaissance role as they were better armoured than armoured cars and most had amphibious capabilities. As the number of tank classifications became lesser and focused on the Main Battle Tank after WWII, the light tank wasn’t fazed out and continued to be developed as air-portable firepower, which could be deployed with airborne troops/rapidly deployable troops.

The US Army had tried a number of such vehicles after WWII, such as the M41 Bulldog, M50 Ontos and M56 Scorpion, with some limited success. So in 1959 a new design was called for that also had to have amphibious capabilities (to match the Russian PT-76).

In 1960 a new design by General Motors called the AR/AAV XM 551 won the Army tender. The XM 551 was named the Sheridan in 1961, after Philip Henry Sheridan, a former US general who fought in the Civil War. Production was to begin at the Cleveland Cadillac plant, which was retooled for production of the XM 551 and was called the Cleveland Tank Plant, after it also started production of howitzers and other AFV’s.

In 1965 the Sheridan’s final design (prototype number 12) was delivered to the US Army for field-testing. Production began at a slow rate in 1966 with an added swim screen (which was removed by 1978) and ended in 1970 after 1622 had been manufactured.

The Sheridan entered service in 1968 with the US Army. It was manned with a standard four-man crew, the commander, the gunner, the loader and driver. It was powered by a General Motors 6V53T, 6 cylinder, supercharged diesel engine generating 300 hp. It used torsion suspension (the suspension of the vehicle was praised by many crew as it was able to traverse ground that other AFV’s couldn’t) and had a top road speed of 72km/h, with an operational range of 600km. Its water speed was up to 3 km/h and relied on the tracks movement for propulsion. The swim screen was made up of 3 piece wooden hinged frontal bow, which was placed on the frontal armour, whilst a fabric skirt ran round the hull and was held up by poles at the rear of the hull.

In order to keep the weight down, the Sheridan had very thin aluminium armour and during the Vietnam War, its belly proved highly susceptible to mine’s, so the crews would travel on the top of the vehicle whilst not being fired upon.

The Sheridan had a very unique main gun called the M81. Whilst other light/reconnaissance tanks were using main guns at around 76mm calibre, the M81 was a whopping 152mm’s. To keep the weight down of the vehicle the designers were not able to use a large anti-tank cannon as found on MBT’s, which are needed to achieve a high muzzle velocity need for an APFSDS to destroy another MBT. So the designers decided to use HEAT ammunition, which becomes more effect as the calibre is increased, so the M81’s was increased to 152mm so the Sheridan was able to engage MBT’s at short ranges. The M81 was also able to fire canister shots, turning the 152mm main gun in to a large lethal anti-personnel shotgun.

For the Sheridan to successfully engage a tank at longer ranges, the M81 was able to fire the MGM-51 Shillelagh anti-tank missile which was manufactured by the Aeronutronic division of the Ford Motor Company. It entered production in 1964 and was designated the MGM-51A. It was controlled via infa red and enjoyed a high hit success rate. The Sheridan was able to store 8 missiles and twenty M409 HEAT rounds. The use of the missile gave the Sheridan the ability to successfully defeat any Russian armour at the time up to 2000m.

Theoretically the Sheridan was a superb vehicle, but it was plagued with problems through out its service, which mostly centred on the M81 main gun. Its recoil was so powerful, (as can be seen in the above video) that the vehicle would rock backwards and could lift the two front drive wheels off the ground. It could also cause damage to the delicate electronics inside the vehicle and the subsequent thud as the vehicle came back in contact with the ground would damage the radios.

The most serious problem was centred around the breechblock, which started to develop cracks in its metal after it had been fired a number of times. After much research, it was found that the cracks were caused by part of the MGM-51 missile interfering with the slots cut in to the barrel to house it. So the MGM-51 was withdrawn and production was replaced with the modified MGM-51C. The new missile was 1.14m in length, 150mm in width and weighed 27kg. In total over 88000 were manufactured until production ended in 1971. The manufactured Sheridan’s were recalled and received the modified M81E main gun, which had the slots in the barrel machined shallower than the original M81. Another modification was the introduction of the ‘Closed Breech Scavenging System’, which cleared the main gun of burning residue left by firing conventional ammunition, which fouled the main gun for when firing the MGM-51C missiles, which could damage its electronics.
The M551 was deployed during the Vietnam War. Whilst being highly valued by the troops on the ground (it was heavily deployed within the cavalry units) it didn’t receive the same respect with the higher brass in the US Army. It had replaced the M48 Patton, but attacks by mines and RPG-7’s would destroy the Sheridan rather than immobilise it like the M48 Patton tank. 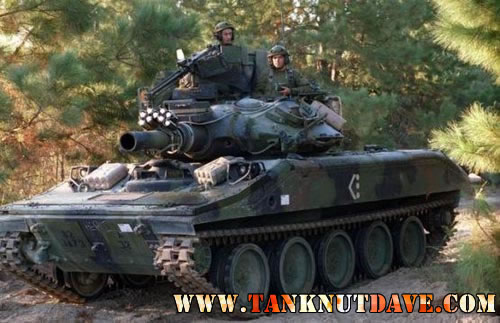 The Sheridan was also deployed via airdrop in the 1989 US invasion of Panama and 51 were deployed during the Gulf War with the 82nd Airborne Division. Due to their lack of modern up-grades, they were only used in limited roles, such as attacking Iraqi bunkers with the MGM-51C, rather than the anti-tank role. The Sheridan was removed from active service within the US Army throughout the 90’s in favour of the M2 Bradley (M3 variant).