Founded in 1991 Belarusian firm Minotor-Service Enterprise designs, manufactures and supports land and amphibious tracked combat vehicles. The 2T Stalker is the firms 1st new build vehicle. First seen in 2000, two working prototypes have been built to meet the requirements of the Belarusian Army, however it has not attracted any orders.

The vehicle has an operational range of 1000 km’s, thanks to its large fuel capacity and supplies for the 5 crew. Its on-board surveillance equipment includes multi-channel sights, target tracking and a communications suite capable of transmitting information over long ranges. 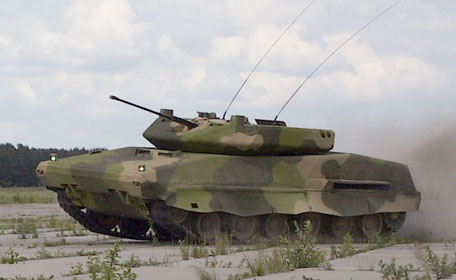 The vehicles non metallic external surface appearance is due to it being fitted with a coating and material that reduces the vehicles radar, infra-red and optical signature to the enemy.

The vehicle is equipped with a laser warning system, so that if a laser range finder (which is used by both tanks and anti-tank missile systems to lock on to a target) is pointed at the vehicle an alarm is signalled and smoke grenades are launched at the direction the laser is coming from.

The vehicle is fitted with an NBC over-pressure system and its frontal armour arc can withstand 35mm rounds as used by most modern IFV’s. 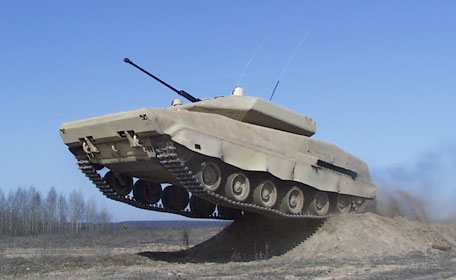 The vehicle superb agility is provided by a diesel engine, hydro mechanical transmission, hydrostatic steering, and hydro pneumatic suspension, which gives a Top Road Speed 115km/h . It has a Combat weight of 27.4 tonne. 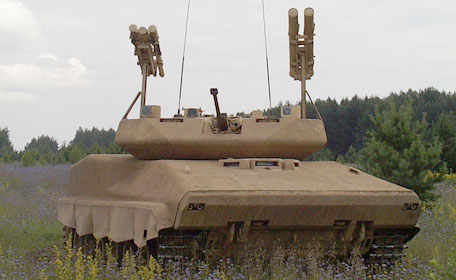 The fire control system ensures simultaneous engagement of two targets, e.g. an armoured threat by the anti-tank missile, and infantry by the automatic grenade launcher.