The definition of “Warrior” in the dictionary is • noun (especially in former times) “a brave or experienced soldier or fighter”, which is a befitting name for a vehicle that was developed in the mid 1970’s by GKN Sankey, that has seen action in operation Desert Storm, Bosnia and Kosovo on peace keeping duties and the 2003 invasion of Iraq and as of the summer 2007, has also been deployed in Afghanistan, it has earn’t its name, the Warrior.

In October 2011, Lockheed Martin UK won the Warrior Capability Sustainment Programme contract after the MOD secured 1 Billion pounds funding for the upgrades to keep Warrior in service until 2040. Several hundred Warriors will be upgraded. (see below for up to date details).

The Ministry Of Defence started to make proposals for their future APC requirement from 1967 until 1971. GKN were selected to undertake competitive studies and subsequently won the bidding for the contract in 1976 and production begun in 1979, where it was called the MCV-80. It had to meet several criteria, firstly it had to have the capacity for ten infantry men which was to inc the crew and their equipment, secondly it had to be able to match the speed of the newly appointed British Army MBT, the Challenger 1, thirdly its protection had to be strong enough to with stand indirect artillery, hand held rockets and small arms fire. It also had to be versatile in the jobs it could be used for, such as a support maintenance vehicle or air defence, creating its own family of different versions of the vehicle.

In 1984 GKN had completed its contractual obligation and produced 12 MCV-80’s, four of which participated in exercise Lionheart in Germany to see if they could match the speed of the Challenger 1’s and in the same year the British Army welcomed the MCV-80 into service, were it was renamed The Warrior.

Initial orders by the MOD for the Warrior were 1053 vehicles, made up of seven variations, but this number was reduced and by 1995 the British Army had received 789 Warriors.

The infantry command and section vehicles are the only ones equipped with the Rarden 30mm cannon. Both the cannon and turret were supplied already constructed by BMARC ready for installation to the GKN workshop, but construction of the cannon and turret is done now by BAE Systems, as BMARC was taken over by RO Defence, which is now part of BAE Systems. The cannon is capable of penetrating other APC and light armoured vehicles at a range of 1500meters. The other versions are fitted with a ‘dummy’ cannon for extra storage space in the turret but are all equipped with a 7.62mm chain gun mounted co-axially with the cannon, both giving the Warrior an anti-helicopter fighting capability.

The Warrior also has 8 LAW-80 anti-tank missiles stored ready for use or can also be fitted with Raytheon Missile Systems, TOW wire guided anti-tank missile launchers, which can be mounted on each side of the turret. These missiles travel at 200m/ps to a range of 3,750m. The Warrior has the capacity to carry four TOW missiles inside and two in the launchers.

The Warrior’s much respected speed is down to its Perkins Rolls-Royce V8 Condor engine, which produces 550bhp. This too is delivered already constructed for installation at the GKN workshops. Along with its four speed fully automatic transmission and hydrostatic drive steering and with the improved suspension and a lower ground pressure, the Warrior can travel at 75kph on and off the road up to 50kph allowing it to keep pace with the British Army’s newest MBT, the Challenger 2.

The aluminium armour construction provides protection against 14.5mm armour piercing rounds, 155mm air burst shell fragments and 9kg anti-tank mines. The Warrior can be fitted with appliqué armour. In battle-field situations, as seen in the 2003 invasion of Iraq, Warriors have been fitted with cage armour, (A.K.A. bar armour, slat armour, and stand-off armour) which attaches on to the sides & front of the vehicle. It’s simply designed to defeat shape charged rounds, most commonly the RPG-7, as used by insurgents in Iraq. In Bosnia, a Warrior drove over a Serbian anti-tank mine and received little damage. However three Warriors of the Staffordshire Regiment were destroyed and nine soldiers killed when their Warriors were mistakenly attacked by American A-10 Thunderbolts firing Maverick missiles. But the Warrior can also boast it has NBC protection and when fully supplied the Warrior and its crew can operate in NBC conditions when all hatches are secured, for 48 hours (as it has a loo inside the main compartment).

In 2010 funding was secured for the Scout SV and General Dynamics UK won the contract, since when Lockheed Martin UK was then the only company invited by the Ministry Of Defence to take part in the discussions on progressing WCSP.

In October 2011, Lockheed Martin UK won the WCSP contract after the MOD secured 1 Billion pounds funding for the upgrades to keep Warrior in service until 2040 .380 will be upgraded. 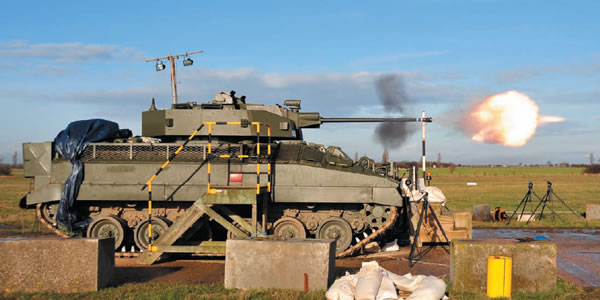 This includes upgrading rather than replacing the existing turret structure with many systems from the new FRES SV Lockheed Martin UK turret and using the current rotary base junction, turret ring and reusing BGTI (Battlegroup Thermal Imaging), although it will be fully stabilised to meet the fire on the move requirement.

The armour solution is a modular appliqué ceramic system for the turret and a common mounting system for the hull so various types of armour packs can be rapidly fitted which maximises soldier protection against specific threats. The mine blast resistant seat subsystem has also been successfully tested in a full scale MoD mine blast test and a series of armour blast and ballistic tests have confirmed that the new turret affords significantly more protection.

As Lockheed Martin UK is the turret integration authority for the new Scout SV vehicle, using its upgrades will provide significant synergies for both vehicles including:

The only export of the Warrior has been to Kuwait In 1993, who purchased 254 Desert Warrior vehicles fitted with Delco turrets, stabilised M242 25 mm chain gun with coaxial 7.62 mm chain gun and 2 x Hughes TOW ATGM launchers (one mounted on each side).