The development program for a replacement to Frances AMX-30’s which had been in service since the 1950’s begun in 1977. Originally the Leclerc’s development had been a joint project with West Germany and was known as the EPC (Engin Principal de Combat), but was cancelled in 1982 and the French arms manufacture GIAT took over its development.

In 1986 the first EPC prototype was completed and re-named ‘Leclerc’ in honour of General Philippe Leclerc de Hauteclocque. The General had been the commander of the Free French 2nd Armoured Division during the Second World War and had led the drive into Paris during its liberation after the Normandy landings.

The Leclerc was named by the media as the “AMX-56”, however the vehicle was not manufactuered by Atelier de Construction d’Issy-les-Moulineaux (AMX) and is simply called the Leclerc in France.

Mass production of the tank started in 1990. It entered service with the French Army in 1992 and with the United Arab Emirates in 1995. The second series started with batch 6, with an added climate control system, Batch 7 introduced a transmission system to the command vehicle. Batch 8 was a modernisation of the electronic systems, and batch 9 replaced the visor with a SAGEM Iris system with thermal imaging, which allows acquisition of targets at a greater range. All previous batches will be modernised up to the standards of batch 9. The final delivery of batch number 10, the S-XXI series, was made in 2007 to the French Army bringing the final total to 406 Leclerc’s. 320 of them will make up 4 regiments each of them having 80 Leclerc Main Battle Tanks. 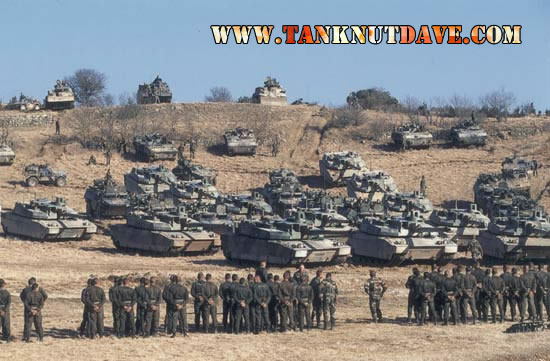 The batch 10 S-XXI series for the French Army, are equipped with a Thales SIT and ICONE battle management system and combat net radio. Currently their are 100 Leclerc’s equipped with these new systems and enable it to set its pace to the enemy through the exchange of digitized data including, tactical situational awareness (the positions of allied/hostile forces & designated targets as well as route and mission planning) with the graphic orders displayed on a background map, between the vehicle and higher level command. All other btch’s will be bought up to this grade.

The commander’s sight is the SOIM HL70, which has optic filters and image intensifier for night vision and has the priority control over the gunner’s sight for aiming and firing, giving the tank the ‘hunter killer’ capability.

The UAE version has been adapted for tropical and desert conditions. It uses the MTU 883 V-12 diesel engine providing 1500hp, coupled with the Renk HSWL295 TM automatic transmission. This has meant the hull has had to be extended at the rear to fit the larger MTU engine, diesel auxiliary power unit and fuel tanks.

The Leclerc is all about speed. Its the lightest modern NATO tank weighting 56tons (some 10+ tons lighter than the M1-A2), as it has a much smaller hull and turret, giving it an added bonus of excellent Strategic mobility. It carries a SACM V8X-1500 4-stroke liquid cooled V8 diesel engine, which generates 1500hp thanks to its Hyperbar process. By using exhaust flow from a gas turbine, it gives extra boost to the engines turbo charger. Added with its computerised EMS500 automatic gearbox and its lightweight, the Leclerc is able to do 0 to 30kph in less than 6 seconds. Its capable of carrying 1300 litres of diesel fuel giving it a 550km fighting range. The Leclerc has a top road speed is 72 km/h and can go up 55 km/h off road thanks to its hydrogas suspension.

But it’s not only the tanks speed that is fast, its also it’s firing rate. The Leclerc has an auto loader situated in the turrets bustle, which allows for a smaller crew space in the turret and a lower profile, making it a harder to hit. The auto loader is fed through a two layer magazine which contains 22 rounds and a further 18 rounds are kept in storage and by reading a barcode on the round, it is able to load the type of round the gunner selects. The gunner’s sight is the SAGEM HL60, which has a laser rangefinder, thermal imaging and stabilized aiming unit, which allows it to fire on the move giving it a 95% hit rate. The digital fire control system allows the gunner or commander to select a total of 6 targets in 30seconds. With all these features, it can boast a fire rate of 12 rounds per minute from its main cannon.

The gunner’s station is equipped with gunner’s main sight, three periscopes and a visual display unit. The gunner’s stabilised sight is the SAVAN 20 from Safran, which contains a three-field-of-view thermal imager. The driver has three periscopes, the centre periscope is the OB-60 driver’s sight developed by Thales Optronique (formerly Thomson-CSF), which has day and night capabilities.

The main gun is the French produced CN120-26 120mm smoothbore, which fires APFSDS (1,790 m/s muzzle velocity) and HEAT rounds. The Leclerc enjoyed the title of having the longest cannon in NATO at 52cal Length, until the Challenger 2, with its L30 55cal Length cannon entered the battlefield. But the Leclerc’s cannon is still longer than the smoothbore cannons on the American Abram series, Leopard 2 A4 & A5, Merkava, Ariete and various up-graded M60 series. This means it produces higher muzzle velocity, so has more range and greater punch through enemy armour over these tanks. The Leclerc is also the only NATO tank to carry a 12.7 mm coaxial MG. On top of the turret there is also a 7.62 mm anti-aircraft MG in an armoured casing.

The Leclercs armour system is modular boxes mounted on to the steel construction. The original armour system was spaced perforated steel plates inserted in to the modules. On batch 10, the Leclerc retained its modules but instead inserted titanium/tungsten tiles (a basic composite armour to shatter APFSDS). It’s also beleived that NERA (Non-Explosive Reactive Armour) is then placed either behind or in front of those tiles in the modules to defeat HEAT.

The Leclerc is equipped with the Nexter and Lacroix Tous Artifices developed Galix combat vehicle protection system. Nine 80mm launch tubes housing smoke, anti-personnel or infrared decoy grenades are fitted on either side of the turret roof.

Nexter has also developed the KBCM defensive aids suite. Evaluated by the French Army, the system warns of a laser (used by guidance systems of ATM) being pointed at the vehicle, as well as incoming missiles and is also able to jam Infra-Red. It can be integrated in to the FINDERS/ICONE battle management system. 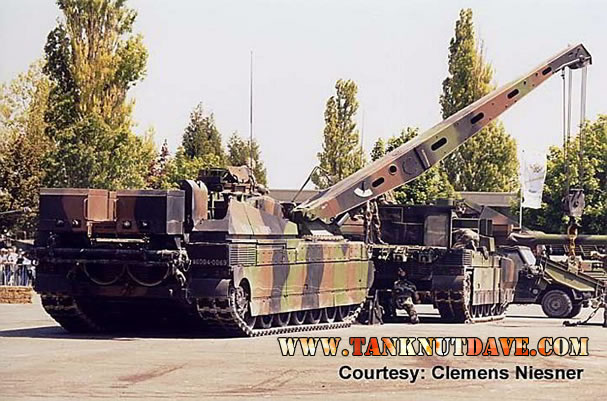 The Leclerc ARV is the New Generation Recovery Vehicle (NGRV) It’s hull has been lengthened with seven pairs of wheels. It’s equipped with a hydraulic blade at the front to clear battlefield obstacles. The vehicle is equipped with a hydraulic crane rated to lift 30000kg loads and a winch with 180m cable rated at 35000kg. A secondary winch is rated at 1500kg. The crane and winch systems are supplied by Rheinmetall Landsystemes GmbH. 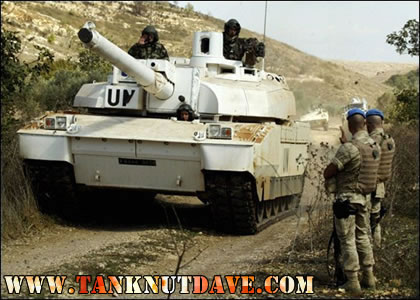 The Leclerc has not seen any serious combat , but 15 were deployed in Kosovo for UN peace-keeping duties as well as South Lebanon.