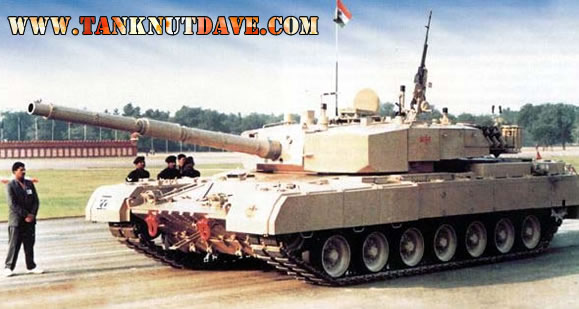 The Indian Arjun Main Battle Tank has been a work in progress for many decades (since 1972) in India by The Defence Research and Development Organisation (DRDO) in an attempt to develop an indigenous tank that enabled India to break away from having to rely on the licence production of other nations tanks.

The vehicle is equipped with 120mm rifled calibre Length 55 main gun capable of firing HESH (High Explosive Squash Head) and APFSDS (Armour-Piercing Fin-Stabilized Discarding Sabot) rounds at the rate of 6-8 rounds per minute. 39 rounds are carried in protected storage. Unlike most rifled main guns the Arjun can fire a modified HEAT round. Though details are not given, HEAT rounds generally are less effective as the imparted spin from the rifling effects the shaped charges inverted copper jet.

The main gun has a coaxial 7.62mm Machine Gun and a roof mounted 12.7mm MG. The main gun is fully stabilised so can fire on the move. The Fire Control System is fully computerised with a laser designator and thermal sight for the gunner and the commander has a independent sight (day channel only) giving the vehicle a hunter killer capability, making it a third-generation tank.

The vehicle is fitted with a composite armour called Kanchan. Tests of the armour showed it to withstand APFSDS rounds fired at it from a Russian T-72. The vehicle is equipped with full NBC protection and a HALON fire detection & suppression system within the crew compartment.

The vehicle uses the world famous German MTU diesel engine (turbo-charged), which gives 1400hp, a top road speed of 72km/h and an operational range of 450km’s.The vehicle has proven to have a low ground-pressure, which has been idea for desert warfare mobility. The vehicle uses a hydrogas suspension, which gives a smoother crossing over rough terrain, allowing it to travel faster over rough terrain, a more stable platform for firing on the move and greater comfort to the 4 man crew.

The Arjun Mk I entered service with the Indian Army in 2004. The tanks were first inducted into the 43rd Armoured Regiment, Indian Army Armoured Corps, which was later built up to regiment strength in 2009, while the latest induction has been into the 75th Armoured Regiment on 12 March 2011. A total of 124 Mk I’s have been ordered.

During 2010 the Mk I entered a trial pitting one squadron (14 tanks) of Arjun’s against an equal number of T-90’s. Each squadron was given three tactical tasks; each involved driving across 50 kilometres of desert terrain and then shooting at a set of targets. Each tank had to fire at least 10 rounds, stationary and on the move, with each hit being carefully logged. In total, each tank drove 150 kilometres and fired between 30-50 rounds. The trials also checked the tanks’ ability to drive through a water channel 5-6 feet deep. The Arjun’s demonstrated a clear superiority over the T-90.

For a second order of Arjun’s to be confirmed by the army, it is was been conditional on 93 improvements, including 19 major modifications.

1. A new commanders independent sight with a thermal channel so the vehicle can flex its hunter-killer capability at night.
2. A new laser detection system that launches smoke grenades obscuring the vehicle in the enemies sight.
3. The ability to fire Israeli LAHAT (Laser Homing Attack or Laser Homing Anti-Tank) missiles from the main gun capable of engaging/destroying both enemy armour and enemy combat helicopters.

The hull and turret have been modifed to reduce the tanks over all weight to 55+ tonnes, thus easier to transport like the T-90.

Trials started late June 2012 of the Mk II at the Pokhran field firing range in India where the above upgrades were be tested. The trrials were successfull and in 2014 118 Arjun Mark II tanks were ordered.