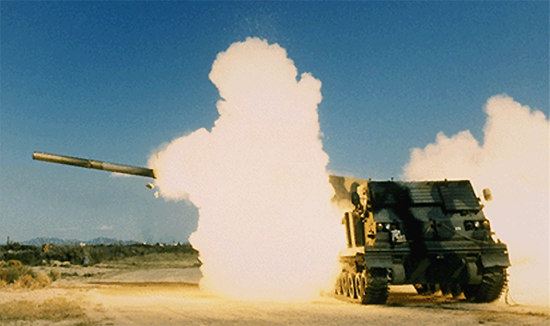 In late 1975, the U.S. Army’s Aviation and Missile Command division (AMCOM) made proposals for a rocket support system to work with traditional cannon artillery and in mid-1976 the project for the General Support Rocket System (GSRS) was created on a temporary bases. In 1977 the U.S. Secretary of Defence authorized the Army to proceed with the development of the GSRS and in the same year several arms manufactures were invited to produce prototypes and the project was given a permanent status.

Up to 1979 the Vought Corporation had been testing and firing rocket munitions from a new six pack launching pod and Germany, France, and the United Kingdom also signed up for a joint development and production of the GSRS, where it was re-designated the MLRS and production began in 1980.

It entered service in the U.S. in 1983 and with production in Europe by a consortium of companies in NATO countries, including Great Britain, it is now in service with over 15 countries across the world, with over 1300 built.

The MLRS chassis is a longer version of the M2 Bradley IFV’s. It is powered by a 400 hp Cummins Diesel engine, providing a top road speed of 40mph and an operational range of 300 miles. It is manned by a three-man crew, the driver, gunner and section chief who are protected in the cab by aluminium armour. Weighting in at just over 24 tons, with its length almost at 7meters, width at almost 3meters and height over 2.5meters, the MLRS is transportable by Air Force C-5 and C-17 aircraft’s.

One of the main qualities of this vehicle is the variation of munitions that it can fire. The launcher carries two pods, each of which carries 6 rockets. There are roughly over ten variations of rockets used by the MLRS including ones developed in Europe. The most common rocket is the U.S. M26 unguided surface-to-surface rocket. It carries 644 M77 Dual-Purpose Improved Conventional Munitions (DPICM). The warhead bursts open at an optimum altitude and distance from the target realising both anti-armour and anti-personnel sub-munitions which can destroy 1 square Km of soft skinned vehicles and personnel up to ranges of 23km. Over 700 000 rockets have been manufactured for the MLRS. 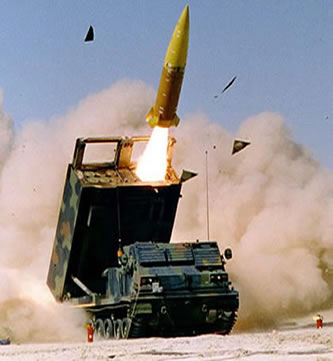 The MLRS is also able to fire two of the guided Lockheed Martin Army Tactical Missile System (ATACMS) and its variants. The Block 1 variant carries 950 baseball-sized M74 sub-munitions to ranges exceeding 165km. The Block 1A has an extended range of over 300km. The number of sub-munitions was reduced to 275 M74’s and a GPS guidance system was added.

The MLRS uses a computerised fire control system. It receives a transmission form the command post of the selected target data and firing can be carried out either manually or automatically. It is able to fire all twelve rockets or 2 ATACMS within 1 minute. These can be fired individually or in ripples of two to twelve. The two pods are loaded into the launcher by the two booms that extend outwards from the launcher. Once above the pods they are lifted via winches off the ground and the booms then retract back into the launcher with both pods, which can be done within 4 minutes. 1 MLRS firing all twelve rockets can blanket a target area and cause more damage than three regiments of 155mm artillery guns (howitzers), such as the M109 Paladin.

It made its debut onto the battlefield in the Gulf War and was the first ground vehicle to fire. Iraqi soldiers gave it the nickname “steel rain” after being on the receiving end of the 10,000 rockets and 32 ATACMS fired in the Gulf War. It has seen further action including the 2003 invasion of Iraq where it is still deployed with the British Army.

The M270 Multiple Launch Rocket System finished production ended in 2003 after its finial batch was delivered to the Egyptian Army. A number have been up-graded by Lockheed Martin since 2000 to the M270A1. The A1 has an improved Fire Control System and an Improved Launcher Mechanical Systems (ILMS), which reduces the time to aim the launcher from 93 seconds to 16 seconds. The ILMS has also reduced the reload time from four to three minutes and the system is due to be installed on the British Army’s MLRS. Further developments are also being made to a number of munitions for the MLRS, which will allow it to destroy armed vehicles and will be effectively taking on the same roll of MBT’s. 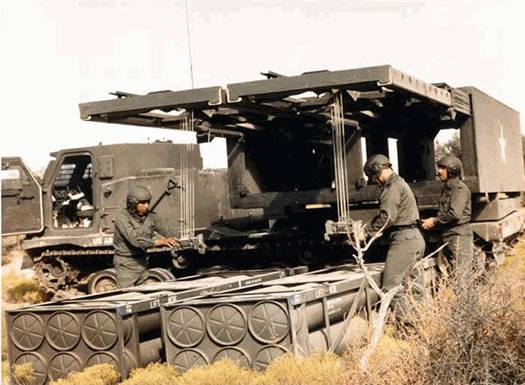 The British Army has two Regiments equipped with the MLRS, one Regular and one Territorial. The Regular Regiment operates 18 launcher vehicles and the TA regiment 12 in peace and 18 in war.

In 2007, Gunners & their MLRS’s from the 39th Regiment Royal Artillery (The Welsh Gunners) based in Newcastle, were deployed in the Helmand province of Southern Afghanistan. During theatre they have fired the new GMLRS XM30 rocket with its 200lb high explosive warhead, which has been developed by the UK, other European countries and the US. It has a range of over 70km and earn’t the nickname ’70km Sniper’ because of its high accuracy thanks to the rockets on board GPS system.