Like the US MRAP program, the Bundeswehr has been running their own protected vehicle procurement program called GFF, which is an acronym for armoured command and multipurpose vehicle.

GFF 1 (5.3 tonne): The LAPV Enok (Light Armoured Patrol Vehicle) has been selected for the GFF 1 category  and 247 vehicles have been ordered.

Since 2007, two vehicles have been trialled by the Federal Office of Defence Technology and Procurement WTD Military engineering services, the Krauss-Maffei Wegmann’s (KMW) Grizzly and Rheinmetall’s Wisent. 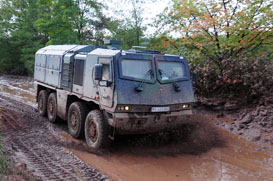 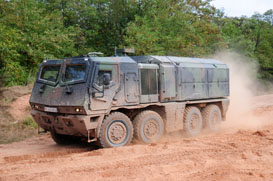 Named after a large European buffalo, the vehicle can be configured in variants ranging from 6×6 to 10×10, as well as a tractor-trailer combination or container carrier. The vehicle is transportable in the new Airbus A400M aircraft, of which Germany has ordered 60.

The mission module, also known as the multipurpose build-on, has a 1.80 metre-high interior, designed to provide adequate space for a variety of equipment kits, with no need to dispense with excellent protection against landmines, IEDs, ballistic and NBC threats.

In accordance with Federal Agency for Defence Technology and Procurement (BWB) specifications, Rheinmetall plans to equip the Wisent with a remote-control weapon station for weapons ranging in calibre from 7.62mm machineguns to 40mm automatic grenade launchers, providing it with a robust self-defence capability.

“Road testing, which began in October 2008, has been successfully completed, as has protection qualification. Still to come are the climate trials, which will also take place in 2010, the final stage in the comprehensive testing programme”. It then went on to announce in the same year “Serial production of the Wisent could begin as early 2012 in Kassel”.

In 2010 Rheinmetall AG and MAN Nutzfahrzeuge AG joined forces to form a new company called Rheinmetall MAN Military Vehicles GmbH. RMMV. This company will manufacturer the Wisent if its selected. It will also include suspenions and chassis technology from the well respected Irish Firm Timoney Technology Ltd.

Rheinmetall have not announced in a press release being awarded the contract to build their respective vehicles for the GFF 4 category, nor KMW about the Grizzly, which they have renamed the GFF 4 and though they are still marketing the vehicle,  Wisent is not on Rheinmetall product list and appear to be focusing on their new Survivor R unveiled in 2014.