The US Armoured IFV Series Background

The M113 APC had served the US Army well before the appearance of the Russian BMP-1, an Infantry Fighting Vehicle, which offered great protection and offensive capabilities than any APC in US service.

The M113A1 had entered production in 1964 and was used in the late 60’s as the basis for an improved vehicle. The US Army then decided to go with the more heavily armoured and more capable Bradley IFV also developed by FMC, who had manufactured the M113, but was heavily exported.

The US Armoured IFV Series

The improved vehicle saw the addition of module armour on the front (box) and sides (identified by rounded edges with bolts), which was bolted on to the existing aluminium armour frame of the M113. A undesignated laminate armour was then inserted in to these modules.

The vehicle has a 3 man crew. The driver sits front left, the commander behind him. The gunner is located in the turret, which is right of the commander. The turret has and can be replaced with a shielded .50cal firing station.

The vehicle which carries 7 equipped troops, is powered by a Detroit Diesel 6V-53T V-6 liquid cooled diesel, generating 264bhp. This is an improved engine of the original used in the M113 series and is located front right of the driver. The vehicle is fully amphibious.

The basic model features as stated above are those, which were configured to the requirements of the Dutch Army and was designated the YPR-765 and went on to serve as the international model.

The Netherlands was the first nation to step up and purchase the vehicle under the designation YPR-765. AKA the Dutch Army, they initially ordered 880 in 1975, but went on to licence build the vehicle and the final number delivered was 2079.

The vehicle is gradually being replaced with the continued delivery of Swedish BAE CV90’s and has gone on to sell surplus vehicles to other nations. 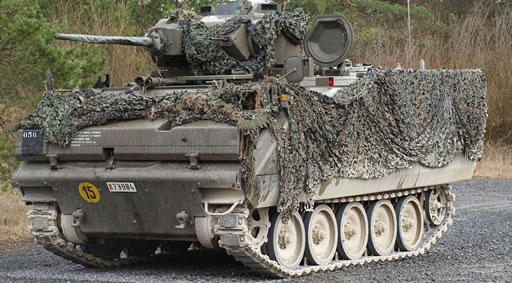 The Belgian Army licence built from 1979, 514 vehicles under the designation AIFV-B.

This vehicle is gradually being replaced with the Piranha IIIC 8×8 wheeled IFV and have been selling the vehicle on to other countries.

Turkey has been a prolific manufacturer and future developer of the vehicle, under the designation ACV. Turkish firm FNSS not only licence built the series, but went on to develop a second vehicle, which has also been a great success.

Not all variants of all three models are included as its an inexhaustible list and come in multiple roles.

The ACV-300 was a further development of the earlier ACV series. it’s a larger vehicle, with an additional road wheel (6 total, earlier ACV AAPC has five) and an increased hp (300). (Turkey has 665)

ACV-IFV – this is the ACV-300 troop carrier with FNSS’s Sharpshooter Turret, which uses a 25mm Bushmaster chain gun.
ACV HMTS – ACV-300 armed with four Hellfire missiles in the ready to fire position.
120mm AMV – A private venture, armed with a TDA 120mm recoiling mortar in the rear of the vehicle. Not in service.
ACV-350 – Fitted with a 350 hp powerpack.

This vehicle is the most modern variant and a stretched ACV-300. The torsion bar suspension has been upgraded and a new 350hp Detroit diesel with an Allison fully automatic transmission. Its fitted with air-conditioning and an over-pressure NBC system.

The vehicle can be adapted for other roles. In 2007, Janes reported a Middle East country had purchased this vehicle in a command post vehicles. 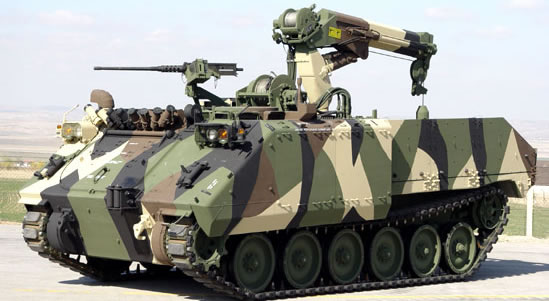 The US Armoured IFV Series Operators

Philippines – followed after the Netherlands with an order of 80+ vehicles equipped with the KBA 25mm auto cannon and Armoured Recovery Vehicles in 1979. 6 Turkish ACV-300’s were purchased in 2009 (see below Turkish vehicle entry).