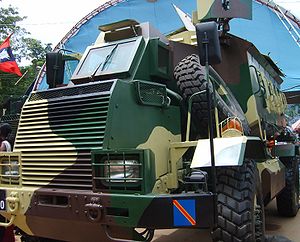 Sri Lanka had tried to develop a protected Armoured Personnel Carrier during the 1980’s Civil War to protect against Tamil fighters IED’s. In 1985 the army imported South African Buffel’s and in 1987 developed their own version of the vehicle called the Unicorn. It was much like the Buffel however the forward driver and rear troop compartments were joined together.

Various Mk’s had been developed and manufactured when production ended in 2000. A total of 93 Unicorns were produced, with Unicorn VI being the most advanced version.

Although similar to the South African Buffel, it is built entirely by the Sri Lanka Electrical and Mechanical Engineers (SLEME).

The Unibuffel is the improved version of the Unicorn which was also built by the SLEME. More than 53 Unibuffels had been manufactured as of 2006. The vehicle is powered by a TATA engine and uses Chinese manufactured bullet proof glass.