The M44 was a turret-less SPG howitzer that was mounted in a barbette (protective circular armour feature) superstructure, which could be elevated from -5 to +65 degree’s and traverse 30 degree’s either left or right.

Manufactured by Massey Harris in 1950, the superstructure was mounted on the M41 Walker Bulldog Recon tanks hull. It was powered by a Continental A0S-895-3 petrol engine, which generated 500hp. This gave a top road speed of 56km/h and operational range of 122km. 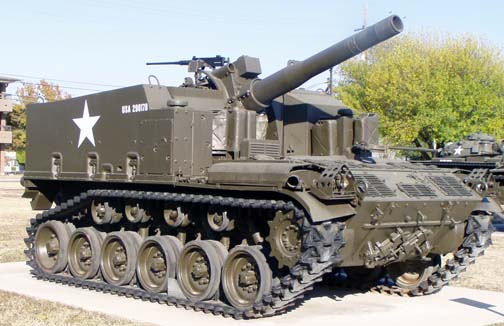 The 155mm main gun fire several rounds, including smoke and illuminating. A standard High Explosive round could reach 14.6km. It had a 12.7mm (.50 cal) MG for close encounters, mounted on the left of the superstructure. A spade at the rear of the vehicle is lowered in to position with the ground and continues to lower as the vehicle reveres, pushing the spade into the ground, so as to stabilize the vehicle whilst firing.

The vehicle was upgraded with a new Continental A0SI-895-5 petrol engine, which had fuel injection.  The vehicle was replaced from 1963 onwards by (what was at the time) the new M109 SPG.

The M52 Self propelled Gun

Production of M52 (armed with a 105mm main gun) started in 1951, but problems with the design prevented its immediate deployment. M52 was finally issued in 1955. The total crew consisted of eight men, but when travelling three crew having to ride in an ammunition support vehicle. The vehicle was replaced from 1963 onwards by (what was at the time) the new M108 SPG.