Like many countries, both Austria and Spain had had limited success at the development and production of quality indigenous Armoured Fighting Vehicle’s and had relied on either foreign vehicles or out dated designs, so both countries joined forces forming the Austrian Spanish Cooperation Development AKA ASCOD, at a time when both countries were seeking to modernise their Armies with a 3rd Generation Infantry Fighting Vehicle.

The vehicle was developed by both the Spanish firm Santa Bárbara Sistemas and Austrian firm Steyr-Daimler-Puch, who were both bought by the US firm General Dynamics and since 2003 are part of the company “General Dynamics European Land Combat Systems” based in Austria. Both companies manufactured the vehicle for their respective nations, prior to their purchase by General Dynamics (and still do).

The vehicle was developed and available in number of roles for production in both countries:

The ASCOD 105 – AKA LT-105 Light Tank is an ASCOD hull with a 3 man turret developed by GDELCS (Spain), which is mounted with a 105mm semi-automatic low recoil rifled main gun. Its only offered to the export market.

Donar – A medium-weight 155 mm self-propelled artillery system based on the successful German KmW PzH 2000 artillery system integrated with the ASCOD 2 chassis. A prototype begun firing trials in 2008 in Germany.

The IFV configuration is the most common and has entered production in both countries. The vehicle has a number of commonalty parts and some specific to each country. Those commonalty include:

Main Armament – The German Mauser mk30/2 30mm dual-feed, gas-operated automatic cannon. It has a rate of fire of 800 rounds per/min and can fire a range of ammunition including APFSDS rounds. Elevation is from -10° to +50° with a turret traverse of 360°. The cannon is fed by two bins/drums, which store a combined 200 rounds. An additional 205 rounds are stored in the vehicle. Both vehicles have a coaxial 7.62mm MG for close encounters. 700 rounds of 7.62mm are fed by a bin/drum and an additional 2200 rounds are stored in the vehicle. The turret drive is electrical instead hydraulic, preventing cook off of hydraulic lines if the armour is penetrated.

Protection – The vehicle is an all-welded steel construction rated against 14.5 mm (at up to 500m) and 7.62 mm rounds. Full NBC system. A bank of 5 smoke grenade launchers is mounted on both sides of the turret.

Designated the Pizarro, the IFV entered trials in 1992 and entered production in 1996, when the first order of 123 IFV’s and 23 C2V’s was made, which were all delivered to the Spanish Army by 2002.

A second larger order totalling 707.5 million Euros, encompassing a number of variants was placed in 2003. These included: 106 IFV’s, 5 C2V’s, 28 artillery observation vehicles, 8 ARV’s & 1 AEV. These 2nd generation (of the series) vehicles are designated the Pizarro II and deliveries are being made between 2008 to 2013. A third order of 80 vehicles was placed in 2008 of undisclosed variants.

Fire Control Systems – The FCS is supplied by Spanish firm Indra Sistemas. Designated the Mk10, It’s made up of a digital ballistic computer, gunners site with a day channel and SVT-02 thermal imager channel, with a laser rangefinder.

Protection – SABBLIR ERA bricks are fixed across the front of the hull and turret (recognisable by the cross on the front of each brick).

The Pizarro II is to equipped with the same MTU Series 199 diesel engine which generates 720hp and is used on the Austrian ASCOD, as well as a new Indra Sistemas VC2 second-generation thermal imager. In November 2004, Indra was awarded the contract to upgrade the first delivery vehicles with the VC2 and improve on the stabilization.

GDELCS (Austria) have been working on an improved version called the Ulan 2, which focuses on the introduction of the heavily gunned and devastating BMP-3 turret. Status of the project is not fully known at this time (December 2009). 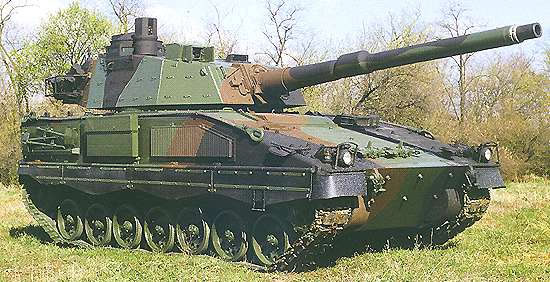 The British Army in recent years has been developing a program called The Future Rapid Effect System (FRES) which is a fleet of vehicles that can be rapidly deployed, network-enabled, capable of operating across the spectrum of operations, and protected against current threats.

The first of these vehicles to have a secured future has been the Specialist Vehicle. Its to include a reconnaissance (scout) vehicle and other roles such as repair.

In March 2010 the MOD selected the General Dynamics ASCOD Common Base Platform and awarded them the contract for the FRES SV for a family of vehicles to replace the CVR(T) family.