The British Centurion had been a huge success for the British Army (and would be for many other Armies later on) through out the Korean War. But with the separation of Germany into West and East after the Second World War, East Germany formed part of the U.S.S.R. There had been an ever-growing distrust immediately after WW2 between the Western countries (Great Britain, America, France and others) and Russia, especially over the use of the atomic bomb. As a result Russia built a wall along the border of East and West Germany, effectively cutting itself of from the rest of the world and the following decades were called the Cold War.

The Western countries formed a coalition of its military powers called the North Atlantic Treaty Organisation – NATO and the former Russian U.S.S.R and its neighbouring states formed the WARSAW Pact in 1955. With such tension and unease between these two powerful military organisations, both started building up military strength along the border of East and West Germany.

Though the Centurion had proved itself exceptionally capable against the Russian T-34 with its 85mm and T-54’s 100mm cannons, with only a 105mm cannon, it lacked the fire power and armour to taken on the Russians heavy Josef Stalin/T-10 with its 122mm cannon. The FV214 Conqueror was shortly introduced, mounting a 120mm cannon, but it was too heavy and expensive for mass production and proved unpopular with British crewman. Leyland had been the main contractor of the Centurions manufacturing team and had been building their own prototypes and in the 1960’s the MOD accepted their design, which was designated the FV4201. 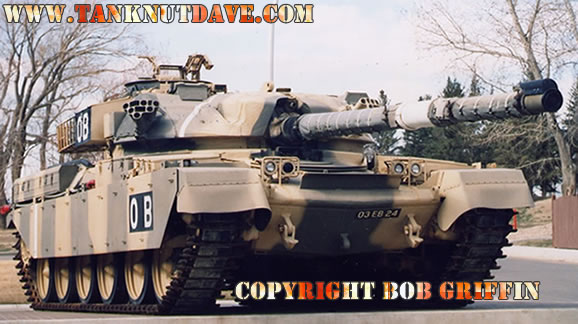 The Chieftain design incorporated the British Armies doctrine of the time, that survivability was gained through firepower and heavy armour, but sacrificed speed and manoeuvrability due to the weight of the heavy armour. It carried the 120mm cannon needed to take on the Russian T-10’s and it had new radical ideas, which were adopted by other countries later tank designs (and still aspiring too), which was rather than the driver traditionally sitting up right, he would lay in a semi-reclining seat, centrally located in the hull front and a mantle less turret to create a lower profile.

The main 120mm L11 cannon is the prominent feature of the Chieftain and is a cal Length 55. It was the first tank to use a L55 main gun and was the longest main gun in NATO, not the French Leclerc. Its ammunition caused difficulties in that a traditional cased round to fit a 120mm cannon was large and required a lot of storage space, which the Chieftain did not have. This problem was rectified by the use of bag charges as used in large calibre naval guns. This allowed the Chieftain to fire Armour Piercing Discarded Sabot rounds and High Explosive Squash Head/High Explosive rounds AKA HESH. Its secondary weapons were a 7.62mm Machine Gun coaxial mounted next to the cannon and 7.62mm MG fixed at the commanders cupola and 2×6 smoke grenade launchers.

One of its biggest problems and was to haunt the Chieftain through out its service, was the engine. A new NATO STANAG introduced in 1957 meant that the engine had to be able to run from several different fuels. A new 2 stroke engine with vertical opposed pistons based on a German design was developed by Leyland called the L60 to meet this new requirement, which delayed the development. Further delay was caused by the rear of the tank hull having to be extended to fit the new engine, which increased the weight of the tank over the originally required weight of 50 tons.

6 prototypes were delivered to the British Army in 1961 for trials and several faults were high lighted and rectified. This included the swap to bigger road wheels as used on the Centurion to increase ground clearance to 22inch’s, rubber pads were added to the tracks as to prevent damage to German public roads and the exhaust system was over hauled to prevent the gearbox from over heating.

The Mk 1 Only 40 were produced for field trials and training with 1st and 5th RTR, and was cleared for service in 1963. Production began in the same year and was shared between ROF Leeds and Vickers Defence Systems.

The Mk 2 was the tank that went into full-scale production and entered service with the 11th Hussars and 17th&21st Lancers being the first to receive the Chieftain, in 1967. It was fitted with NBC equipment in the turret and snorkel wading equipment instead of the originally proposed flotation device.

The Mk 4 was built to specifications required by the IDF who had had a keen interest in its development. In 1966 the British Government had agreed for the Chieftain to be built in Israel under licence and the IDF had done extensive field tests with prototypes in 1967 which lasted two and half years. Due to mass objections of other Middle-East countries who threatened trade embargos, a heated argument occurred between the MOD who were in favour of the IDF purchasing the Chieftain and the Ministry of Foreign Affairs who were against. The Ministry of Foreign Affairs won the argument and in late 1969, Britain cancelled its offer to the IDF, which was a catalyst for the design and production of the Israeli Merkava MBT. This also saw up-grades to the L60 increasing its power to 585bhp.

The Mk 5 was the last production model built for the British Army and the most common Mk in service. It included modifications to the L60 engine bringing its power output up to 650bhp allowing it a top road speed of 48km/h and range of 500km. Changes to storage were also made, so that 64 rounds could be stored in the vehicle and an improved NBC system. The Mk 5/L was fitted with a new laser range finder and a muzzle reference system AKA MRS was introduced as Mk 5/1. Mk 5/3 was introduced as the Improved Fire Control System AKA IFCS. The Mk 5/4 was the final production vehicle which saw further changes to the ammo storage so it could accommodate APFSDS rounds.

There were various up-grades introduced to the British Army Chieftain fleet and subsequently a varying number of different Mk’s including Mk 7 which saw the L60 engine power increased to 720bhp & 750bhp on the Mk 8 were in service. They also included up-grades to the sighting and fire control systems with newer versions, but were not always introduced to all of the British fleet. The most radical Mk’s were Mk 10 which saw the introduction of the added Stillbrew Applique Armour on the front of the turret and the final Mk 11 which had Thermal Observation and Gunnery System AKA TOGS by 1988.

The British Challenger 1 Main Battle Tank was only a temporary stop gap for the British Army. They had been using the Chieftain MBT since the mid 60’s. A new pioneering type of armour known as ‘Chobham’ had been developed by a Dr Gilbert Harvey at the formerly known ‘Fighting Vehicles Research and Development Establishment’ in the UK.

The British Army needed a new Chieftain Replacement that could be fitted with the new armour. Their had been British replacement programs such as The FV4211 Aluminium Chieftain, The FMBT Program and The MBT80 Program but were all cancelled or failed to reach the prototype stage, leaving the British Army with out a replacement until the 1990’s.

The VDS new design was chosen as the British Armies new Main Battle Tank and replacement for their Chieftain fleet, designated the Challenger 2 FV4034. Aka “CR2” it entered service in 1998 with the Royal Scots Dragoon Guards in Germany.

The Chieftain was also built in different variations, these included the FV4205 AVLB, the FV4204 ARV/ARRV, Armoured Recovery and Repair Vehicle, the Chieftain Mine Clearer, the Chieftain Sabre-Twin 30 mm AA turret and the Weapon Carriers, where the Chieftain chassis was modified to mount air defence weapons (“Marksman” 2 x 35 mm cannon) and a 155mm howitzer in various modifications.

Around 900 Chieftain MBT’s were produced for the British Army and were still in service until 1996 serving along side the Challenger 1. The Chieftain Combat Engineer Vehicles are gradually being fazed out in favour of the new TITAN AVLB and TROJAN AVRE.

Unlike previous British battle tanks, it was not adopted by Common Wealth countries, but was hugely exported to Middle-East countries.

Kuwait purchased 165 Mk5/2k’s with the first delivery being made in 1976. Oman also purchased 12 Mk7’s from the British Army and then bought 15 newly built Mk 15’s which were designated Qayd Al Ardh, a famous desert warrior. These were fitted with the NANOQUEST L20 sight which incorporates the Ferranti type 520 laser range finder.

The biggest export was to Iran, who had purchased a number of Mk 5P’s, which were delivered during 1976. The Mk5P had increased mine protection, extra fuel capacity, an automatic gearbox and added shock absorbers. Iran had then placed a new order to add to this number, a combat improved late production Chieftain called “Shir-1” (125 were ordered) and an improved “Shir-2” (1225 were ordered). The Shir-1 had entered early production by 1979 at the Royal Ordinance Factory as first deliveries were due in 1980, but the order was cancelled following the 1979 Iranian Revolution.

The Shir-1 modifications were to the turret and the new Perkins Engines Company Condor V-12 1200 diesel 1200hp engine. Jordan then placed an order in November 1979 to purchase 270 Shir-1’s. The fire control system was up-graded and the vehicle was re-designated the “Khalid Shir” and were delivered in 1981. The Shir-2 design went on to become the Challenger 1 Main Battle Tank with the British Army. The only real combat experience it saw was with Iran, in the 1980-88 Iran-Iraq War.