The Cruiser tank by definition is one built for speed. It works independently of the slower Infantry tanks. Once a front line was penetrated the cruiser tanks would then speed through to the rear line, attacking lines of supply and communication.

Between both World Wars, tank design had been rather lacking due to funding and a resistance to mechanisation, as many had viewed the tank as a fad of World War I. Russia had purchased a prototype tank (which evolved into the T-34) from the American inventor John Walter Christie, who had developed a new type of suspension called Christie suspension, which allowed tanks to travel at faster speeds cross country.

The series were plagued with problems and saw very limited active service and ended up as training vehicles.

The Nuffield Company had been developing at the same time, their own cruiser tank, called the A15 cruiser tank Mk VI, AKA the Crusader and was adopted by the British Army as its principal tank.

The first A15, the Crusader I, had a noticeable mini-turret mounting a BESA MG. This small MG turret was later removed, as it was too cramped, and the fumes from firing the MG would very nearly incapacitate the unfortunate crewman who operated it! The Crusader II had increased armour on its hull front and the turret front. Both vehicles were equipped with a 40mm main gun, which could be replaced with a 76.2mm howitzer known as the Crusader IICS (Close Support). Both vehicles were 5.99m in length, 2.24m in height and 2.64m wide.

The Crusader III was the most commonly used tank. It had increased armour of up to 51mm. The 40mm main gun was replaced with a 57mm one, this then meant the crew had to be reduced from 4/5 to 3 and the commander had to be the loader as well. It was also equipped with a BESA 7.92mm MG. It retained the same engine as used in the Crusader I & II, the Nuffield petrol Liberty L-12 V12, which generated 340bhp, with a top road speed of 44km/h and an operational range of 161km. Its physical size was also increased. Its length was 6.3m & width 2.24m, but maintained the same height.

The Crusader entered service in 1940. It served in the North African campaigns, Operation battle-axe in Libya in 1941, Operation Crusader in 1941 (Siege of Tobruk). It proved capable against the Italian tanks, but couldn’t take anything over the German PzKpfw II. A consortium of manufacturers, headed by Nuffield, built a total of 5300 Crusaders. It was withdrawn from active service following the introduction of better tanks such as the Sherman, Cromwell & Comet. The Crusader’s hull was used for other roles. 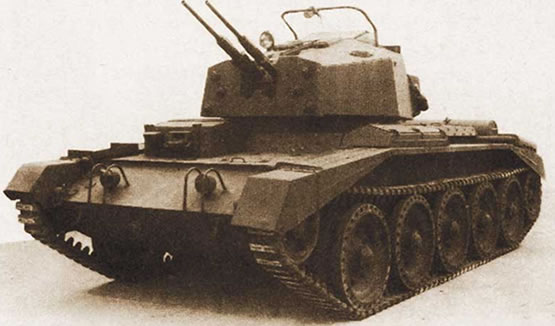 Crusader AMRA
Fitted with Anti-Mine Roller Attachment for mine clearing