The FV101 Scorpion was designed and produced as a replacement to the Saladin armoured car, as an air-portable armoured reconnaissance vehicle, by the British firm Alvis Vickers. It was part of the Combat Vehicle Reconnaissance (Tracked) program AKA CVR(T). The first prototypes were completed in 1969. After successful field trials production began, with first deliveries being made in 1972 and was accepted into service with the British Army in 1973.

The chassis of the CVR(T) proved to be versatile and was used to build a number of different vehicles in varying roles, to form the back bone of the British Armies mechanized forces.

Commonalities in the family – All are built for from aluminium, which gives protection against small arms fire, a general lighter weight so are deployable from a C130 Hercules aircraft, a lower ground pressure so doesn’t sink in desert and other soft grounds like marsh/swap.

The vehicle was fitted with a Jaguar J60 No1. Mk 100B 6-cylinder petrol engine, which generated 190hp. The FV101 Scorpion still holds the world record as the fastest tank in the world.

The crew is always a driver who sits front left (he has infa red night vision), engine to his right and the vehicle commander behind him. All have smoke grenade launchers in various locations dependant on the variant (see pictures).

The Scorpion has been built in the UK and under licence in other countries, predominantly Belgium who produced and equipped the Belgian Army with over 900 of them.

It has also seen service on practically all continents, Botswana in Africa, Chile in South America, India & Iran in Asia, Ireland & Spain in Europe and New Zealand in Australia. Between 1972 – 2004 over 3500 Scorpions had been produced.

The vehicle is equipped with the Swingfire anti tank missile system. It entered service with the British Army in 1975 and went on to see action in the Gulf War in 1991.

The launcher is located at the rear of the vehicle and contains 5 pods, each with a missile in it. When firing, the launcher’s front is elevated to 35º.

The original system was a 1st generation MCLOS (short for Manual Command to Line of Sight), which involved the operator tracking the missile and the target simultaneously and guiding the missile to the target. The missile is steered with a joystick and its path is observed through a sight.

The system was upgraded to a 2nd generation SACLOS (short for Semi-Automatic Command to Line of Sight) which meant the operator only had to continually point a sighting device at the target while the missile is in flight. On board systems in the missile then guide it to the target.

The operator can use the sight outside of the vehicle, so that he can track the target from another location from where the vehicle is. The Swingfire missile can do sharp 90º turns so the vehicle doesn’t have to be in the exposed line of sight position. The missile is a HEAT (shaped charge) warhead and has a range of 4000m’s and is wire guided (course corrections are fed to the onboard systems via wires). It could penetrate up to 800mm of steel.

The missiles production ended in 1993 and slowly the system has been replaced with anti-tank teams using the modern top attack Javelin hand held launchers, which are deployed from Spartan APC’s.

The Spartan APC entered service with the British Army in 1978. It (and its variants) were to replace the 1950’s Saracen 6×6 wheeled APC, but not as replacement to the older FV432 tracked APC.

The vehicle has a two man crew, driver and commander in his cupola on the left. His cupola has several periscopes giving a 360º view around the vehicle. He has a 7.62mm GPMG mounted on the right of his cupola for close encounters.

It carries a 5 man troop, 4 sit in the rear compartment and the troop commander sits on the right of the vehicle commander and has his own hatch.

By 2001, 900 Spartans had been built. Nowadays the vehicle is used in the British Army for the deployment of specialised anti-tank and anti-aircraft teams who use hand-held systems like the Javelin and Stinger. It also served as a missle reload vehicle for the FV102 Striker.

The vehicle is in service with Belgium, Jordan, Oman and the UK. 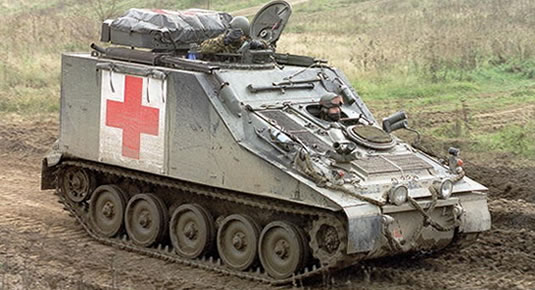 This is the ambulance variant of the CVR(T) family. It is fitted with a large raised roof superstructure. This increased space enables the vehicle to carry up to six patients on stretchers. 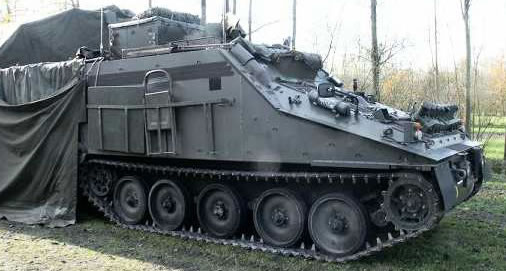 It is fitted with a large raised roof superstructure (just like the FV104 Samaritan), which providing a more practical office space inside. This contains a large vertical map board and desk along one side, with a bench seat for three people facing it. Forward of this are positions for the radio operator with provision for four radios and vehicle commander, whose seat can be raised which also gave his access to the pintle mounted 7.62mm GPMG.

The back of the vehicle is designed to be extended by an attached tent to form a briefing area. The map board can be removed from the vehicle and hung from the tent poles, along with overhead lights connected to the Sultan’s power supply. However, this option has been removed from many vehicles in service.

The main role of this vehicle is to recover the CVR(T) family of vehicles. It usually carries a crew of three operating a 3.5T capstan winch that can also be utilised in a lifting configuration. It carries suitable equipment to enable a 4:1 mechanical advantage with 228m of winch rope. A manually operated earth anchor is situated at the rear to anchor the vehicle while operations are carried out.

The word scimitar was used to describe a curved edged sword, which was used several hundred years ago for its fast attack, speed and low damage. The British Army’s FV107 Reconnaissance Tank has the same attributes and is also called the Scimitar.

But the main differing characteristic from the Scorpion is the Scimitars main weapon, the deadly 30mm Rarden auto cannon. Apart from carrying out the role of reconnaissance, the Scimitar was primarily designed to take on hostile light armour, such as APC’s. For this, the Rarden fires Armour Piercing Secondary Effect (APSE), High Explosive Incendiary (HEI), Armour Piercing Discarding Sabot (APDS) with an effective range of 1000m with an effective fire rate of up to 90 rounds per minute. The vehicle can store 165 rounds.

It saw action with the British Armies Blue & Royals (Royal Horse Guards and 1st Dragoons) in the 1982 Falklands War, the Gulf War, on UN peace keeping duties in Bosnia and Kosovo. It is still in active service with the British Army. It fought in the 2003 invasion of Iraq and can now be found fighting in Afghanistan, in the War on Terror, equipped with BAR armour. (Scimitar Page)

Life Extension Programme – During the late 1980’s, Alvis started an up-grade program to replace the Jaguar petrol engines with a Cummins BTA 5.9 diesel engine. The swap from petrol to diesel increased the familys operational range.

Other vehicles are now entering service with the British Army to replace many of the family’s vehicles, such as the 4×4 Panther Command and Liaison Vehicle and FRES SCOUT SV 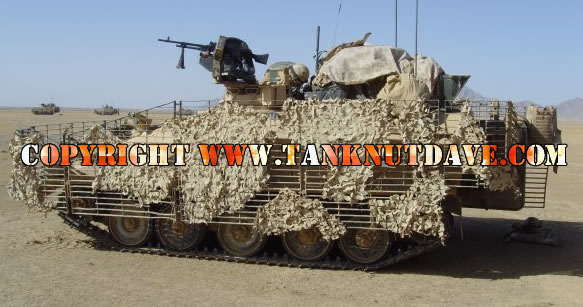 It has seen service on practically all continents, Botswana in Africa, Chile in South America, India & Iran in Asia, Ireland & Spain in Europe and New Zealand in Australia. Between 1972 – 2004 over 3500 Scorpions had been produced.

The family has seen action with the British Armies Blue & Royals (Royal Horse Guards and 1st Dragoons) in the 1982 Falklands War, the Gulf War, on UN peace keeping duties in Bosnia and Kosovo. It is still in active service with the British Army. It fought in the 2003 invasion of Iraq and can now be found fighting in Afghanistan, in the War on Terror, equipped with BAR armour.

Videos of the CVR(T) Family: