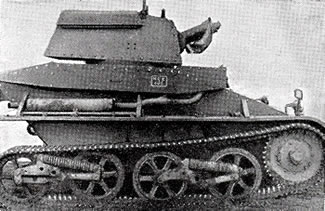 The Mk IV Light Tank was a new Vickers design incorporating some of the elements of the Mk II, such as a one man turret mounting a .303 MG as its main gun and Horstmann suspension, which had been modified.

The modification saw the number of return rollers reduced to 1 and incorporated in to the first bogie. The single rear idler was removed and the second bogie’s rear wheel was lowered to act as the idler as well as a road wheel giving the tracks a new distinct triangular shape.

Trials were conducted in 1933 and entered service in 1934 with the British Army who ordered around 40. By the time World War 2 had broken out, the vehicle was obsolete and used for training British crews.