Despite its name, The Bulgarian BMP-23 Infantry Fighting Vehicle  has very little in common with the Russian BMP series. Bulgaria had licence built the Russian MT-LB APC/tractor and 2S1 Gvozdika 122mm self-propelled main gun (built on the MT-LB chassis) during the 1970’s, so in fact the BMP 23 is a development based on the MT-LB chassis, hence its increased length and additional road wheel compared to the Russian BMP series. Its hull and turret is an all welded steel construction.

Manufactured as an Infantry Combat Vehicle by Bulgarian State Factories in the early 1980’s, the two man turret with slopped frontal armour houses a 23mm 2A14 auto cannon with an effective range of 2000m and can be elevated to +80°. It can fire HE-IT and AP-IT ammunition with a muzzle velocity of 970 m/s. It’s day sight has a magnification of ×4.5 and a 40° field of view.

For longer engagements a turret roof mounted ATWG AT-3 ‘Sagger’ AKA 9K11 (replaced with the AT-4 ‘Spigot’ AKA 9K111 on the later BMP-23A model) missile launcher was equipped, with an effective range of 3000m. Built under licence in Bulgaria, three spare missiles are carried in the vehicle and manually loaded in to the launcher. Three smoke grenade launchers were added on either side of the turret on the later BMP-23A model. All models are equipped with a 7.62mm coaxial MG for close encounters. A locally produced, Russian-designed Strela-2 (NATO SA-7 ‘Grail’) man-portable SAM is carried above the fuel tank which is in the centre of the rear infantry compartment.

The two man turret is set further back than the Russian BMP and is occupied by the vehicle commander (right side) and the gunner (left side). The drive sits forward on the left of the hull (standard three periscopes with the central being removable and replaced with a passive night observation device), with one infantry man sitting forward to the drivers right. The main engine is located behind them. To the rear of the engine and turret bustle is the infantry compartment. 6 troops sit on two benches (three per bench) back to back and facing small ports in the vehicles sides from which they can fire their personnel weapons. They enter/exit the vehicle through two doors in the rear.

The vehicles amphibious capability uses an erected trim vane and propulsion using the tracks. The vehicle uses a 315hp diesel engine and torsion bar suspension. Diesel can be injected in to the exhaust to generate a smoke screen. The vehicle has an NBC system, internal heaters and fire detection/suppression system.

The Bulgarian BMP-23 Infantry Fighting Vehicle has been deployed to Iraq with the Bulgarian Army as part of the Coalition security forces during the ocupation. 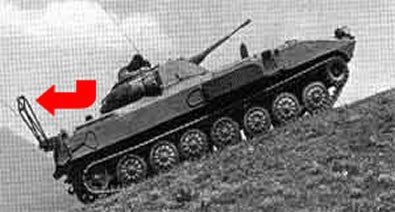 Entering service in 1991, this reconnaissance vehicle is a BMP-23A equipped with communications, navigation and observation equipment. It’s physical differences are the additional transmitters which includes a large folded antenna mounted on the rear of the vehicle. 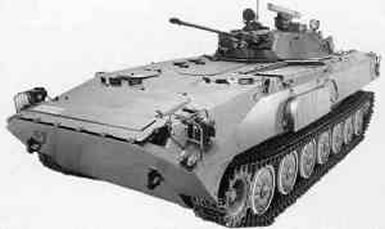 The next vehicle in the series, using the same hull, the upgrades focused on the new increased firepower housed in a new circular turret, resembling the one used on the Russian BMP 2. It had a new 2A42 30mm auto cannon with an increased range too 4000m.

A new launcher for the AT-5 Spandrel ATWG missile was mounted on the turret roof.

It retained a 7.62mm coaxial MG for close encounters. It could fire the same munitions and had the same crew layouts as well as amphibious capabilities. The armour was rated to withstand 20mm rounds and splinters. The vehicles bhp was reduced to 302.

The vehicle was manufactured by the same state factories in 1995. It never entered serial production and its believed only 10 were built, however the vehicle is no longer offered on the export market.