The Swiss firm MOWAG developed a series of 4×4, 6×6 and 8×8 wheeled troop carriers for the Swiss Army commonly known as the Piranha during the 1970’s. Their order books have expanded to include international purchases from many other nations Armies.

This includes the licensed production during the 1970’s of their 6×6 vehicle by GDLS-Canada for the Canadian Army, who designated it the Armoured Vehicle General Purpose AKA “AVGP”.

There were three variants of The Canadian AVGP Family built:

Cadillac-Gage 1 metre turret, armed with a .50 BMG and a 7.62 mm MG. x3 crew and rear troop section accommodates x6 troops who exit through doors in the rear. 269 were built. 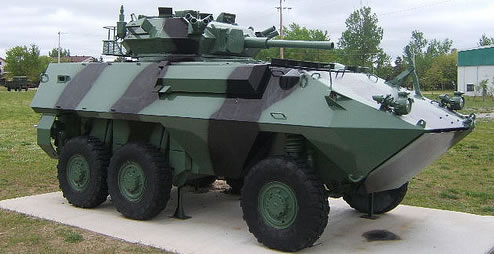 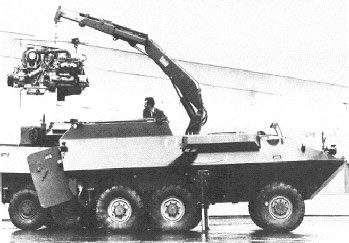 Roof mounted hydraulic crane for lifting and swapping engines on the rest of the family. Vehicle has a crew of 3 engineers. 27 were built.

The Grizzly is no longer in front line service with Canada, but is in Reserve armoured units as well as being converted to support vehicle variants.

The Husky will be life-extended and will continue to be used as a maintenance and recovery vehicle.

The majority of vehicles have had their marine propulsion systems removed during upgrades, which includes the replacement of the original suspension with that used on the 8×8 Bison.

The Canadian AVGP Family Number in service as of 2009

The Canadian Forces Land Force Command aka Canadian Army have been a key player in both NATO and UN lead operations, which has seen the vehicle deployed in both Africa (Sudan) and Former Yugoslavia (Croatia and in Bosnia and Herzegovina).

44 refurbished Cougars with turrets removed, 98 Grizzly and 5 Husky given directly from the AMIS/UNAMID mission in Sudan.