The Swiss firm MOWAG developed a series of 4×4, 6×6 and 8×8 wheeled troop carriers for the Swiss Army commonly known as the Piranha during the 1970’s. Their order books have expanded to include international purchases from many other nations Armies and includes the licenced production during the 1970’s of their 6×6 vehicle by GDLS-Canada for the Canadian Army, who designated it the Armoured Vehicle General Purpose AKA “AVGP”. 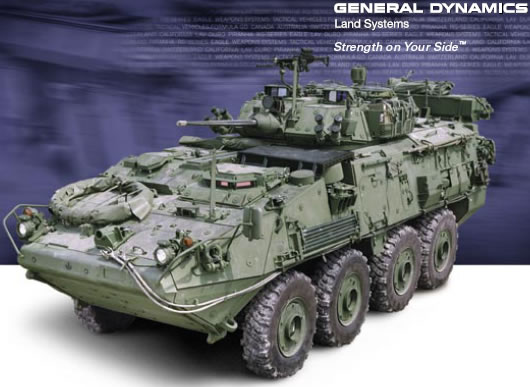 The LAV III offered greater payload carrying capabilities, but most importantly a higher level of protection over other LAV vehicles and non LAV APC’s in service at the time with the Canadian Army. It was purchased to replace all other ageing troop carrying vehicles in the Canadian Army. The base vehicle offered all round protection of 7.62mm fire and with its MEXAS passive armour modules, it could withstand 12.7mm fire. The success of the series has been its high mobility and adaptability to serve other mission roles.

The Canadian Army is the largest operator of LAV III vehicles with 651 delivered to date. Infantry Carriers (313), Command Post (181), TOW missile carrier (71), Forward Observation (47), and Engineer Variants (39). A number of vehicles are currently going through an upgrade program (see entry below).

The Canadian Army has deployed over 100 LAV III to Afghanistan with its contribution (which has been a major presence) to ISAF. The war and its terrain have had a heavy toll on the LAV III, to the point that a reported 33% were out of service at one time. Canada completed its ISAF participation in March 2014.

The “LAV UP” upgrade (see entry below) will extend the LAV III life span and Canaian Army service to 2035.

24 vehicles prdered in January 2013 and will be APC armed with the Samson RWS with M2 Browning machine guns and a Double-V shaped armour in the rear hull to deflect blast effects away from the crew compartment.

Designated NZLAV, GDLS-Canada supplied 104 vehicles between 2003 to 2004. The NZ Army deplyed a number of vehicles to Afghanistan between 2009 to 2013 as part of their contribution to ISAF. All vehicles are now back in New Zeland.

The Canadian Army has been heavily committed to the efforts in Afghanistan for a number of years, which of course means the deployment of the LAV III. Though the vehicle has had some level of success, sadly there have been some losses of crew & troops during IED attacks, as well as taking some serious punishment from the harsh Afghanistan enviroment.

In late November 2008, Canada’s Department of National Defence (DND) announced its intention to combine 3 programs into one general set of upgrades to its armoured vehicle fleets. The C$ 5 billion program would include a “close combat vehicle,” in order to perform as a tracked Infantry Fighting Vehicle or Armored Personnel Carrier alongside Canada’s new Leopard 2A6M CAN & Leopard 2A4M CAN tanks, a new “Tactical Armored Patrol Vehicle” and upgrades to the existing LAV-III wheeled APC fleet.

On the 21st of October 2011 General Dynamics Land Systems-Canada was awarded a contract by The Canadian Department of National Defence valued at C$1.064 billion (US$1.052 billion) to incorporate a comprehensive upgrade package into the Canadian Army’s fleet of LAV III combat vehicles. The LAV III Upgrade Project will modernize 550 vehicles, significantly enhancing their survivability, mobility and firepower and extending the fleet’s lifecycle to 2035.

The upgrade will extend the LAV III life span to 2035 and increase the level of protection to STANAG 4569 level 4 instead of the current level 3.

The first of 66 upgraded LAV IIIs was delivered on February 1, 2013. The success of the upgrade program and budget pressures lead to the cancellation of the Close Combat Vehicle replacement program later that year.

The Nanuk Remotely Controlled Weapon Station was developed in Canada and may well be gradually integrated in to the vehicle.