There are vast area’s in the South of China that are wet lands, which are used to grow rice in called rice paddy’s. MBT’s and Medium Tanks can not effectively operate in these area’s.

China were supplied by Russia under the Sino-Soviet Treaty of Friendship, Alliance, and Mutual Assistance with a number of PT-76 amphibious tank to build under licence to operate in these area’s.

The vehicles hull is boat shaped with two water jets in the rear to propel it in the water and a trim vain is erected on the front. It uses a more powerful engine compared to the PT-76 (a liquid cooled 400 hp 12150L2 diesel) and has a top road speed of 36km and 12km in water.

The vehicle has a turret shaped almost the same to the Type 59, which is mounted with a Type 62-85TC rifled 85mm gun that can fire AP, APHE, HE, and HEAT rounds, with a firing speed of 8 rounds/min, however in late years it was equipped with the same 105mm main gun which can fire armour piercing fin stabilised discarding sabot (APFSDS) rounds. It is also fitted with a primitive light spot fire-control with night vision channel and laser rangefinder input.

The vehicle saw combat in the Sri Lanka civil war, the Vietnam War (used by the North Vietnamese Army), and the 1979 Sino-Vietnam border conflict (used by the PLA). Though the vehicle from a mobility point of view operated well, its light protection (lesser armour is fitted to give it its amphibious capability) saw the loss of a significant number of vehicles and troops.

The Type 63 entered serial production in 1963 and though it was also accepted in to service with the Chinese Marines, it was best suited for land based water operations not ship launched beach landing assaults, which was the Marines bread and butter. 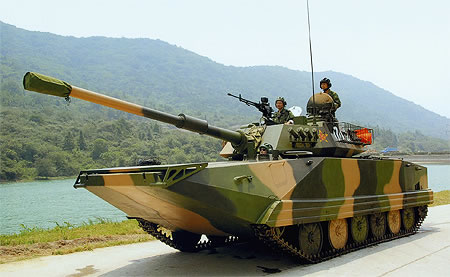 So by the mid 90’s an improved Type 63, designated the Type 63A entered production, which has been replacing the older vehicle in service and its believed that 300 vehicles have been built.

It is equipped with a new 580hp engine with a more streamline boat front, both giving the vehicle an increased power and better handling in rough sea conditions during a ship launched beach landings.

It has an increased firepower with a new 105mm rifled main gun in a new vertical angular shaped turret and FCS allowing for firing on the move on either land or water.

Since then the Chinese have developed a new amphibious vehicle called the ZBD2000.