The vehicle is an armoured steel structure on a Mercedes-Benz chassis originally developed by German firm Henschel Wehrtechnik (which is now part of Rheinmetall) and manufactured by Developed Industries, Arab Organization for Industrialization at their Kader Factory in Egypt. Production started in 1985 with first deliveries being completed in 1986.

The Fahd 240 is an upgraded Fahd, based upon the latest Mercedes Benz LAP 1424/32 chassis. This variant includes a far more powerful engine and a slight increase in armour. It has the same engine as the Fahd. All original Fahd’s have been updated to this standard, and it is the main variant in service with the Egyptian Army.

The driver sits at the front of the vehicle on the left side with the commander to the right. Above the commander’s position is a single-piece, rear-opening hatch cover. The driver has a forward-facing, roof-mounted day periscope, which can be replaced by a passive periscope for night driving.

The hull of the Fahd is of all-welded steel providing protection against 7.62mm rounds and artillery shell splinters. All windows are constructed of bullet-proof glass and additional protection is given by shutters. Smoke grenade launchers are also mounted on either side of the hull (a bank of 4). NBC protection is optional. 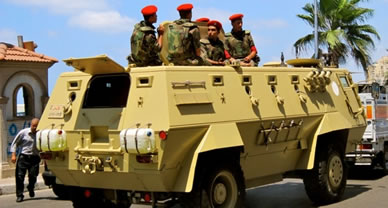 Up to three weapons may be fitted on to the roof of the Fahd, one on each side of the roof hatches and one to the rear. The armament usually consists of three PK machine guns, each with 1500 7.62mm rounds, but other 7.62mm machine guns can be fitted on the vehicle or a MILAN Wire-Guided Anti-Tank Missile launcher. It has a crew of two and can carry ten soldiers.

The vehicle can accommodate stretchered and walking injured soldiers, field medics and equipment. 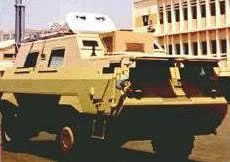 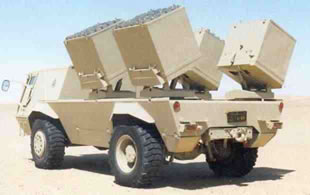 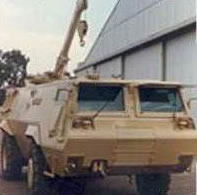 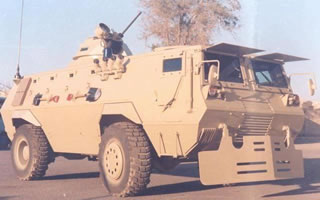 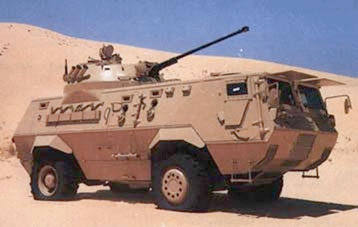 This vehicle has a BMP-2 turret. The turret has a 30mm 2A42 auto cannon with dual ammunition feeds. It has two rates of fire, between 200 to 300per/min in slow or 500per/min in fast. The cannon has a better elevation of up to 75deg. giving it a strong anti-helicopter capability with a range of 2000 – 4000m’s. It has a 9M113 Konkurs ATGM, which can be fired from the safety of inside the turret with a maximum range of 4000m. The turret is also fitted with 6 smoke grenade launchers and a co-axially mounted 7.62mm MG.

The Fahd 280-30 has a third crewman, a gunner positioned in the turret, in addition to the commander and driver. As a result of the relatively large turret this variant has a reduced passenger capacity; it can carry seven passengers instead of the original ten. The turret is standard-equipped with passive IR and night vision sensors. It also has fire control and stabilization.

Egypt – The Egyptian Army is believed to have placed an initial order for 300 vehicles with an option of further 110. The Egypt Army uses the Fahd for border patrolling, the Egyptian police and the central security forces also use the Fahd 208 Anti Riot variant.

Kuwait – Egypt exported 110 vehicles during the 1980’s. However many were destroyed or captured by invading Iraqi Forces during the Gulf War. Kuwait received further vehicles after the war and are believed to still be in service for border patrols.

Iraq – Those captured by Iraqi Forces were returned after the war.

The vehicle has also been sold to Algeria, Democratic Republic of Congo, Oman and Sudan.