The French AMX-10P Infantry Fighting Vehicle development started in 1965 to replace the AMX-VCI APC by Atelier de Construction d’lssy-les-Moulineaux. The first prototype was completed in 1968 and entered French Army service in 1973.

It is currently being replaced in French Army service by the 8×8 The Véhicule Blindé de Combat d’Infanterie (VBCI) as they continue to take deliveries from Giat Industries.

The vehicle uses a three man crew, Driver sits in the front on the left and the engine to his right. In the middle of the vehicle is the two man turret were the Gunner and vehicle Commander sits. The eight infantrymen sit in the rear section. They have roof hatches and a rear ramp to exit the vehicle, with firing ports in the ramp. They also have periscopes in the roof. 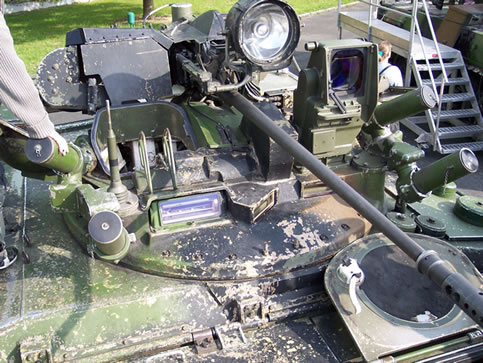 The main gun is a 20mm auto cannon is housed in the two man Toucan II turret and is dual belt fed from two storage bins on either side of the gun. This means the gunner can select either High Explosive or Armour Piercing rounds to fire. The vehicle can carry 760 x 20mm rounds. The main gun can be elevated from -8 to +50 degree’s, with a full 360 degree traverse of the turret. The vehicle is also equipped with a 7.62mm MG for close encounters and can store up to 2000 x 7.62mm rounds. The crew have day and night vision channels on their sighting equipment.

The vehicle is an all welded aluminium construction rated for protection against 12.7mm (.50cal) rounds over the frontal arc and all round protection against splinter shells & 7.62mm MG fire. Its also equipped with smoke grenade launchers and an NBC protection system for the crew and infantry.

The vehicle is powered by a supercharged diesel Hispano-Suiza HS-115 engine, which generates 260hp. It has a top operational range of 500km and can reach a top road speed of 65km/h. The vehicle is fully amphibious with a trim vain and rear water jets for propulsion. 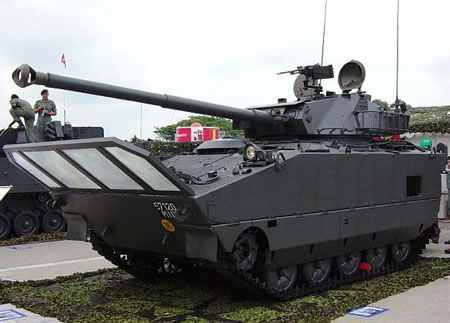 AMX-10P “Marine” – The standard vehicle is fully amphibious, this vehicle was modified for prolonged fresh or sea water operations. It uses different tracks, new 300hp engine, larger water jets and larger trim which is transparent so the driver can see through it. It also has bilge pumps and increased anti-corrosion treatments. It also has a 25mm auto cannon as the main gun.

AMX-10P “upgrade” – In 2005, the French Army placed an order with French state owned Giat Industries to perform an upgrade on 108 vehicles. The upgrade includes some type of passive appliqué armour, improved suspension and gearbox for increased mobility.

The French Army are replacing the AMX-10P with the new 8×8 wheeled VBCI vehicle as its principal IFV. First deliveries and retirements were completed in 2008, with continued deliveries over the coming years.