The Lazika is Georgia’s new tracked Infantry Fighting Vehicle and was first unveiled at a live firing demo in February 2012. The Georgian Armed Forces have 7+ from the first batch of deliveries at it has entered serial production. 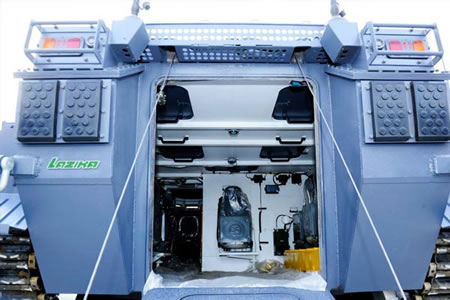 Engine is located up front on the right with the driver to its left. The gunner and commander are located in the centre with the Remote Weapons Platform and the rear is the troop compartment. x7 troops are carried in the compartment, each having a min blast seats. The troops face each other and enter/exit the vehicle via a powered ramp in the rear. 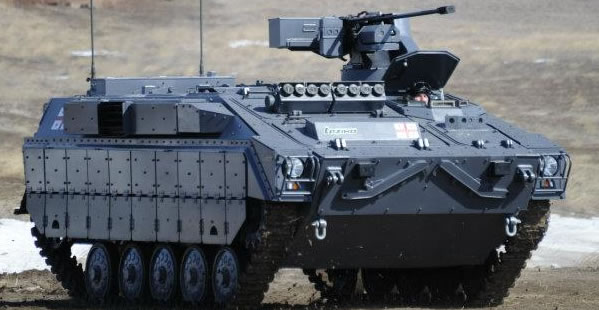 The vehicle is equipped with an unspecified armour package that offers all round protection up to and including 14.5mm calibre AP rounds. Its lower hull also offers protection against blasts from 10kg anti-tank mines. The upper track sections are covered in armoured plates.

The vehicle is fitted with combined armour for all-round protection against 7.62mm NATO rounds and 14.5mm AP rounds at close range. The vehicles belly can withstand 10kg anti-tank mine blasts. It has a forward mounted bank of smoke grenade launchers to lay a smoke screen when withdrawing.

The Remote Weapons Platform is equipped with a 23mm 2A14 chain-gun and coaxial 7.62mm PKT machine gun. Operated by the gunner, who has a day/night and thermal imaging channels for the sights, which can detect and identify multiple targets located at long ranges.

The vehicle is powered by a 300hp turbocharged diesel engine providing a top road speed of 70km/h. It has an operational range of 200km, which can be increased to 400km by additional fuel tanks. It is fitted with torsion bar suspension system.