The PzKpfw IV began its life as the ‘Mittleren Traktor’, or ‘Medium Tractor’, which was then later changed to ‘Bataillonfuhrerswagen’ (BW). In January 1934 the designation for a new medium tank was agreed upon. It would be fitted with a short barrelled 75mm gun and be used for close support. It was to weigh 24 tons and have the same layout and armour thickness as the PzKpfw III.

After a wooden mock-up was produced by Rheinmetall-Borsig AG, the first mild steel prototype was built in 1935 and weighed 18 tons. Krupp AG and MAN also built a prototype each. All three prototypes were put through a series of trials at the Kummersdorf testing grounds. After the trials were completed, the Krupp model was chosen and an initial order was placed for 35, which were all completed by March 1938.

A number of different models were built; Ausf A through J. The first model, the Ausf A, introduced the classic profile of the PzKpfw IV; it also introduced the instantly recognisable suspension. The suspension comprised four bogies on each side of the tank; each bogie carried two pairs of small, rubber tyred road wheels. Each set of 4 road wheels were sprung by half length, elliptical leaf springs. The Sprocket wheels were at the front and the idler wheels were at the rear. It also introduced the drum shaped commander’s cupola with its 8 vision slits round its circumference and located towards the rear of the turret. The next two versions, the Ausf A and B only introduced minor upgrades to the tank’s power pack.

Ausf D – The first version to see combat was the Ausf D which was ready by the time of the invasion of Poland. 220 Ausf D tanks had been produced by then, but only a handful were actually available for the invasion. 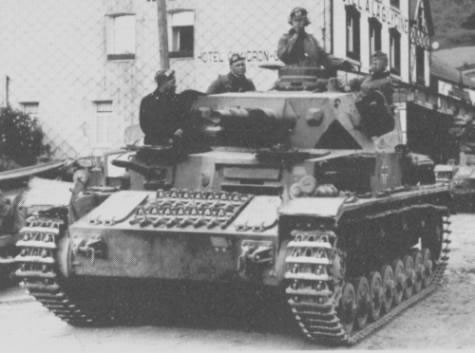 The Ausf D had the short barrelled 75mm gun and was intended to provide close support for the infantry, whilst the PzKpfw III was designed as the battle tank to take on other tanks with. Battle experience in Poland showed that the armour on the Ausf D was too thin, so the next major version, the Ausf E, had its armour increased to 50mm on the front glacis, with an extra 20mm plate bolted on to the hull and superstructure sides.

Ausf F – The next major version, the Ausf F, was introduced at the same time as the roles of the PzKpfw III and PzKpfw IV were reversed. 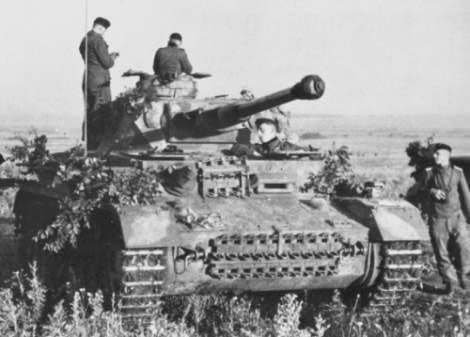 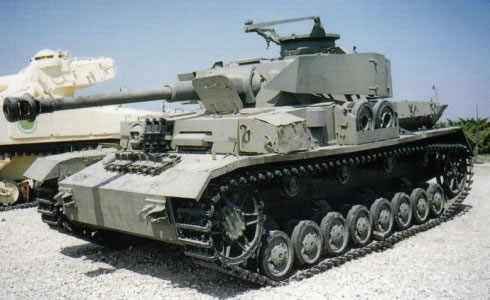 Ausf H – The next version, the Ausf H, was built in even more numbers, with some 4,000 being built. Thicker armour, now up to 80mm on the front glacis, increased the tank’s weight to around 25 tons, but slightly decreased its performance. 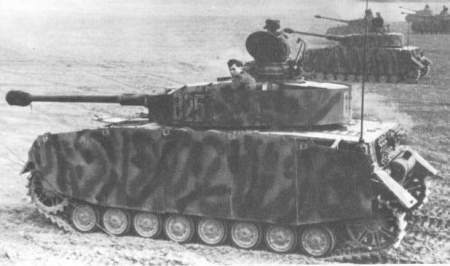 The final production version, the Ausf J, with 1,700 being built, brought the total production of all versions of the PzKpfw IV, to over 8,500 tanks. The Ausf J introduced electrically powered turret traverse.

The PzKpfw IV first saw service, albeit in very limited numbers, in the invasion of Poland and later, France and the Low Countries. At this early stage of the War, only a small number had been built, so it didn’t have that great an impact on the batlefiled. However, once the PzKpfw IV had been built in large quantities, it went on to become the most important German tank of the War and served on all the major battlefields of World War 2. The switch to the long barrelled 75mm gun, came about as a result of battlefield experience against the new Russian tanks, the T-34 and KV-1. Experience on the battlefield also led to various crew modifications, for example, adding track plates to increase armour protection.

So successful was the PzKpfw IV; that General Heinz Guderian, the architect of German Blitzkrieg, declared that the PzKpfw IV should be built in far greater numbers than originally planned. However, because of Hitler’s obsession with ‘bigger is better’, production lines were taken up with building the Tiger 1 Heavy Tank. Some have since argued that if the Germans had concentrated on just building the tried-and-tested PzKpfw IV in large numbers, the outcome of the War might have been a little diferent.

Because of the PzKpfw IV’s success, its hull was used for a number of other different vehicles, mainly Tank Destroyers and Self Propelled Guns, but also engineer vehicles like the Bruckenleger bridge laying tank and the Bergepanzer repair and recovery tank. The best known of the Tank Destroyers and Self Propelled Guns were the Stug IV, the JagdPanzer IV, the Hummel, the Hornisse/Nashorn and the Brummbar. Of the Tank Destroyers, 5 different types were produced, with some 3,600 being built.