The former West German Army issued a requirement for a wheeled family of vehicles during the 1960’s, to fulfil the various roles and job’s that weren’t taken on by the heavier tracked Armoured Fighting Vehicles and could continue to fulfil these roles for many years to come. As of 2010 the vehicle is in service in many roles around the world, including specialist and therefore is a successful design.

Standard vehicle layout is in three sections. The front cab is the driver on the left and commander on the right. The middle section is the engine compartment behind the driver and a corridor runs along the right connecting the front cab to the rear section, which serves the many reported 90 roles the vehicle can be used for. 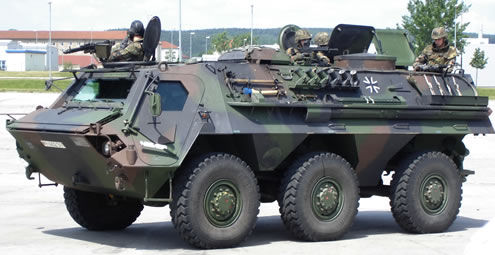 Armoured Personnel Carrier – 2 x crew sit in the front 10 infantry sitting 5 per bench on either side facing inwards in the rear section. 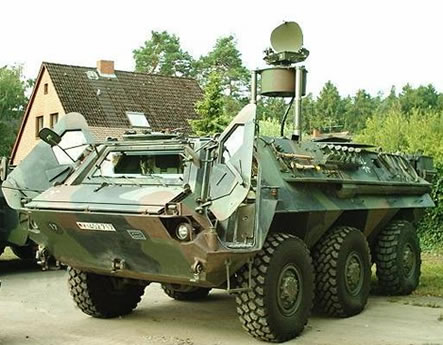 NBC Reconnaissance – modification kits to detect and warn of NBC attack and monitoring aka M93 Fox.

The vehicle is constructed of all-welded steel, giving all round protection of small arms fire and artillery splint shells. Key area’s have built in spaced armour sections. The vehicle has an internal NBC filtration system with a fire suppression system in the engine compartment.

The vehicle uses a Mercedes-Benz Model OM 402A V8 Liquid cooled 320hp diesel engine. This provides a top road speed of 105km/hr. The vehicle is fully amphibious, with a trim vain erected at the front with two propellers in the rear for propulsion, providing a top speed of 10.5km/hr.

The rear has two hatch’s and the roof has a hatch that can mount various weapons, such as a 7.62mm MG with a shield. The weight of the vehicle is around 16.7tons dependant on variant and role.

During the 1990’s, 124 Fuchs were upgraded with MEXAS armour for operations in the Balkans wars and were also equipped with a more powerful 6-cylinder Mercedes-Benz engine.

From July 2003 until the end of 2006 Rheinmetall modified the A7 with the “amendment package 1”. The modifications were reinforcement of the chassis, electro-hydraulic door actuation devices, an air conditioning unit and other mine protection plates fitted on the middle and rear wheel arches. The floating drive and the splash shield were removed. 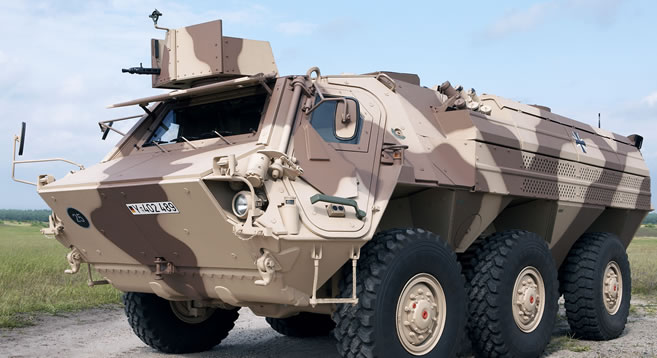 During March 2008 the Bundeswehr, took delivery of the first of a total of 21 vehicles (five ambulances, two command and radio vehicles, three pioneer cars and eleven group vehicles) to meet urgent requirements for vehicles with increased protection in Afghanistan. Another 40 A7’s were upgraded to the A8 in a second order during 2009 and a third order for 65 A8’s was placed in late 2010, bring the total ordered to 126.

The vehicles were beefed up with mine protection panels in the floor, replacement of the existing troop seating with suspended seats, added protection to the wheel arch’s and external storage bins added, which is the easiest way to identify the A8 from earlier models such as the A7.

The vehicles status is not known, however the more capable and better protected Boxer has since been deployed to Afghanistan.

During the 1991 Gulf War, the Allied Coalition Forces were greatly concerned that Saddam Hussein, the then President of Iraq, would use chemical weapons as he had done in the 1980 to 88 Iran – Iraq War against Coalition Forces. West Germany supplied to Coalition Forces the (with some purchasing new vehicles later on) , NBC reconnaissance vehicle.

Israel – NBC reconnaissance vehicles were supplied by West Germany with PATRIOT anti-missile systems from the USA for detecting and destroying scud missiles launched against Israel by Iraq in order to draw them in to the war and break the coalition. These vehicles were returned to Germany after the war.

USA – Designated the M93 Fox, the USA had been purchasing the NBC reconnaissance vehicle through out the 1990’s, totalling 123 purchased, which are now going through upgrades in survivability under the designation M93A1. 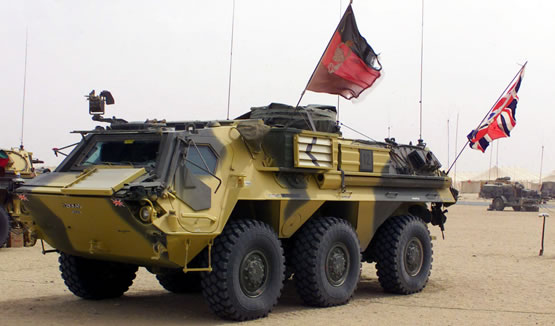 A detection suite, including equipment foratmospheric sampling
Meteorological station and GPS
NBC filtration and environmental control for use in all climates
Chemical agent detection
Independent power supply
Cameras for 360 degree surveillance
IBDS is installed in a container which can be mounted on a vehicle (standard 4 ton) or ground dumped and can be transported by either fixed wing aircraft or helicopters. IBDS provides the commander in the field with early warning of a chemical or biological warfare attack.