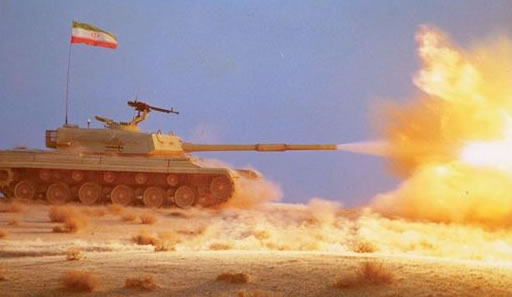 Iran is a country not often associated with tank production, as it relied on purchasing exported vehicles such as the British Chieftain and US M60 series prior to the Iranian Revolution of 1979.

It has however developed the ability to up-grade/modify these and other military vehicles, eventually leading to licensed production of 500+ T-72S MBT’s.

The next evolution was the production of its own indigenous MBT. Testing of prototypes were carried out in 1993 and six semi-industrial prototypes were also tested in 1997.

The Shahid Kolah Dooz Industrial Complex in Iran, was inaugurated as the production line for the new indigenously manufactured Zulfiqar Main Battle Tank, in late July 1997, by the former Iranian President Akbar Hashemi Rafsanjani (however production had commenced in 1996).

The first model that entered production was the Zulfiqar-1, which is in service with the Army of the Guardians of the Islamic Revolution in Iran and as of 2001, 100 Zulfiqar-1 are said to have been produced. The Zulfiqar-2 is a test vehicle and Zulfiqar-3 is in full production.

In order to maintain commonality and logistical support of munitions’ the vehicle uses the same 125mm 2A46M smoothbore cannon used on the Iranian licensed built T-72S. It’s suspension system is torsion bar and based on earlier M60’s and a 12 cylinder diesel engine, generating 780 hp. The Zulfiqar-1 uses the Slovenian EFCS-3 fire control system (which allows the vehicle to fire whilst on the move).

The was said to have entered production in 1999. There are currently no clear figures as to the number of Zulfiqar-3’s that have been produced.

The Zulfiqar-3 has been up-graded with a 1000 hp diesel engine giving a top road speed of 70km/h,fire control system and the autoloader used in the T-72S, reducing the crew to the driver (hull front) the commander (right of turret) and gunner (left of turret) with the autoloader in the centre of the turret. The vehicle is equipped with day and night vision sights, an NBC system, a coaxial 7.62mm MG and a further 12.7mm MG on the commanders cupola. Different sources report the vehicle to have either passive or composite armour. The vehicle’s weight is 40tons, so therefore must have passive armour.

There are a number of visual differences between the Zulfiqar-1 and Zulfiqar-3. Zulfiqar-3’s hull is shaped more commonly to the US M1 Abram’s series. See picture for further differences: