The Israeli Lynx MLRS – Above picture is of 3 Lynx MLRS operated by Azerbaijan, each with the different missile pods it can fire

Manufactured by Israel Military Industries, the Lynx is the next generation of their MLRS systems, which includes the latest following advanced systems: 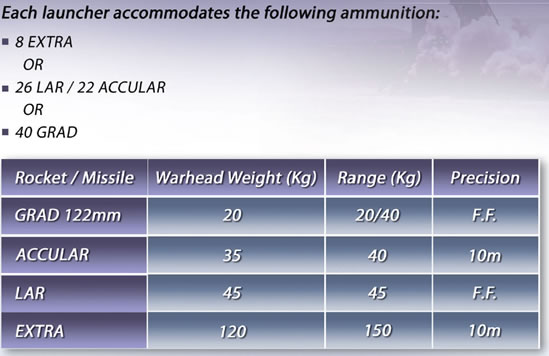 ACCULAR is an autonomous, surface-to-surface GPS guided rocket based on IMI’s LAR-160 artillery rocket. The missile has a range of 14-40 km, a diameter of 160 mm, a length of 3995 mm and a hit accuracy CEP of 10 meters.
The missile’s guidance and navigation is performed by a Flight Computer (FC), which includes a GPS. The IMI jet thruster kit controls the missile by establishing a trajectory correction for precise target engagement.

The system can also fire 122mm Russian BM-21 Grad based rockets. These various rockets are mounted in pods, which the launcher can accommodate 2.

The test bed vehicle has been mounted on what appears to be a German Mercedes-Benz truck chassis, however the only customer so far is the Army of Azerbaijan and they mount the system on the Russian KamAZ-6350 8×8 military trick chassis.