The Italian IVECO 40.10WM aka VM 90 Military Vehicle  is the military version of the IVECO Daily series of 4×4 1.5 tonne light truck. It is officially designated as the VM 90 and used in three variants.

The Torpedo is described by the Italian Army as a multi-role vehicle, capable of carrying 1.5 tonnes of supplies, towing artillery and transporting up to x10 troops, however with just a canvas structure it I unable to offer any armoured protection. A traversable mount can be fitted to the roof of the cab structure capable of mounting Machine Guns of up to 12.7mm calibre.

The protected is a lightly armoured superstructure fitted on the 40.10WM chassis. it’s a single compartment for the crew and embarked troops ( both totaling x7). The vehicle offers protection from up o 7.62mm calibre rounds as well bullet proof windows. Troops exit the vehicle via doors in the sides and rear. Firing ports are mounted along the sides of the vehicle. 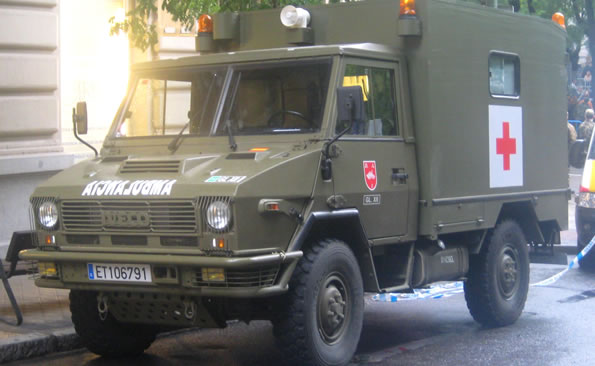 The vehicle is a the 40.10WM chassis and cab fitted with a square rigid superstructure used for treating and transporting either the walking or stretched wounded by field medics. Various medical equipment and treatments are also carried.

Operators of IVECO 40.10 based vehicles