The US M113 APC could be classified as both the most heavily deployed & manufactured under licence AFV in the Western World and NATO friendly countries. Italy fits into both these classifications, with several hundred (M113A1) built by Italian firm OTO Melara for domestic and export use.Around the early 1970’s, the Italian Army had evaluated a number of vehicles in order to improve upon the M113, however due to funding were rejected.

The Italian VCC-1 APC is the Italian improved version over the M113A1, designated the VCC-1. It saw an increase in firepower, improved armour protection, the infantry’s ability to aim and fire their weapons from inside the hull and improved seating arrangements.

The Italian Army deployed with its forces some 50 VCC-1 IFVs to Somalia, which were subsequently fitted with an Enhanced Appliqué Armour Kit (EAAK) similar to those fitted to the AAV7A1 amphibious assault vehicles of the US Marine Corps. 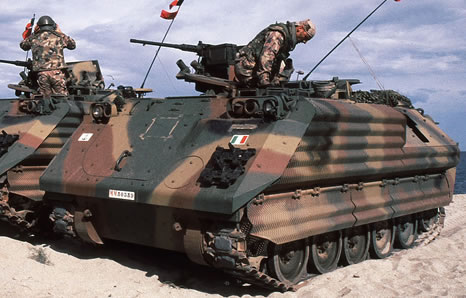 This armour package provides protection against penetration from small arms fire up to 14.5 mm as well as 155 mm projectile fragments. The total weight of the kit is 750 kg and crew survivability is further enhanced by the installation of spall liners inside the rear crew compartment.

The EAAK armour plates use Special Spaced Armour (SSA) which consists of a laminated structure of special steels with non-metallic layers between them. These steel plates break and deflect kinetic energy projectiles and reduce the residual energy so that the projectile or debris cannot penetrate the hull.

These kits were developed by RAFAEL of Israel and supplied to Italy by the FMS Corporation (now Marvin Land Systems) of Los Angeles under a contract worth (US) $1.5 million. The contract was awarded in July 1993 and the kits were delivered and fitted to the vehicles in Somalia early in October, ahead of schedule.

Saudi Arabia placed an order with Oto Melara for 224 VCC-1 vehicles fitted with the same Systems & Electronics Inc TOW ATGW as the M901 Improved TOW Vehicle. The first 10 production vehicles were delivered early in 1983 and final deliveries were made in 1984. 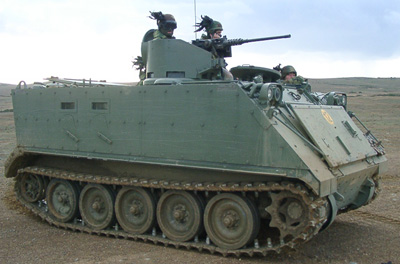 This is the VCC-1 with appliqué armour fitted to the front and sides. There are two firing ports with a bullet-proof vision block above in either side of the rear troop compartment. The VCC-2 has the standard circular hatch for the driver. To the rear of this is a circular hatch for the commander, while the gunner has an externally mounted 0.50 (12.7 mm) M2 HB machine gun with lateral protection. 1760 vehicles were built for the Italian Army and is now being replaced by the more advanced Dardo IFV.