The Korean K21 Infantry Fighting Vehicle has to be the best IFV on the market and truly reflects the transformation that the South Korean Armed Forces is going through, to field the most advanced Armoured Fighting Vehicles on the planet (K2 Black Panther MBT & the K9 Thunder SPG).

This could be due to the fact no treaty between North and South has ever been signed after the Korean War of the 1950’s, so is therefore still technically at War. It therefore has the budgeting other nations don’t have to come up with these fine fighting machines.

South Korea had built in the thousands since 1985, a vehicle based on the LP Armoured IFV, (which was an upgraded M113) designated the K-200 KAFV. The K-200 was/is not a true Infantry Fighting Vehicle, that is it lacks the offensive firepower to tackle other IFV’s and has no anti-tank capability such as an Anti-Tank Missile launcher. This set the requirement for a true Infantry Fighting Vehicle for the Republic Of Korea Army and development started in 1999.

Due to the newness of the vehicle, there is a lot of speculation surrounding its construction and armour, so for the sake of this article, we have simply used information supplied by the manufacturer, Korean firm Doosan DST, who in November 2009, held a ceremony for the delivery of the first completed vehicles to the ROKA.

The two man turret houses the 40mm main gun, which is the largest calibre amongst non Russian IFV’s and a calibre that other new IFV’s are now aspiring too. It can fire not only High Explosive, but Armour Piercing Fin-Stabilised Discarding Sabot (APFSDS for short). These are the latest multi-mode munitions, with settings for impact mode, time mode and proximity mode. This makes the vehicle even more lethal, as the rounds can be set to burst or explode at varying distances and proximity to a target, rather than on impact like many of the more existing established IFV’s. It also means the K-21 will have a greater success at bringing down airbourne targets.

The main gun is fed by an autoloader in to a ready to fire 24 round canister/holder. This gives the vehicle a rate of fire of 300 rounds per minute. The guns stabilization and turret drive are electrical. This helps to reduce the Infa-Red heat signature of its hydraulic equivalent. Turret traverses full 360 degrees and the main gun elevates -7 to +45. It uses a 7.62mm coaxial MG for close encounters.

The vehicles Anti-Tank Missile system is the most latest, using a fire and forget missile, rather than the wire guided systems used on other current IFV’s. This means the K21 does not have to be a stationary target whilst guiding the missile, it fires and scoots off. This system seems to still be having some kinks ironed out and will most likely be a tandem warhead, which is needed to defeat ERA.

The launcher is under armour protection on the left of the turret. it’s a dual launcher that when deploys, the front raises out of the top and points to the sky, which would indicate the future missile will be a top attack weapon.

It uses a modern digital Fire Control System, which allows tracking of a target (including low flying attack helicopters) and includes a commanders independent panoramic sight. It also uses a digital battlefield management system, with displays for the crew and in the rear section for the troops.

The vehicle is powered by a Doosan D2840LXE turbo-inter-cooled diesel engine, which generates 750hp. It uses a fully automatic transmission (gearbox). It uses hydrogas suspension, but lacks the ability to kneel like the ROKA Main Battle Tanks can.

This provides the vehicle a top road speed of 70km/h & 40km/h off-road. It has a cruising range of 450km. Its other capabilities include climbing a gradient of 60% and side slope of 30%. It can cross trenches of 2.5m wide and vertical obstacles 0.8m high. It also has an auxiliary generator to run the electrical systems, if the engine packed up or the vehicle is in a static position, so as to avoid running the main engine and using up all the fuel.
The vehicle has a rather unique amphibious system. It uses a trim vain, but also uses inflatable bags. There is one running under each armoured side skirt. When these inflate they raise the armoured skirts. Its propelled in the water by its tracks, giving a top speed of 7km/h.

Its rumoured that the vehicle is made of a fibreglass and is responsible for its it light combat weight of 25ton, however this is not confirmed by the manufacturers press releases.

What is confirmed is that the hull is covered in modular armour, which can have composite or laminated armour (which can include fibreglass materials) inserted in to the modules.

The vehicle is equipped with an internal fire detection and suppression system. It also uses smoke grenade launchers. 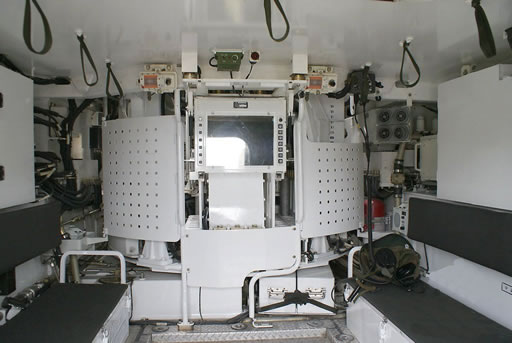 The commander and gunner are located in the turret and the driver is front left in hull. The rear section can accommodate 9 fully equipped troops who exit the vehicle through a rear ramp. 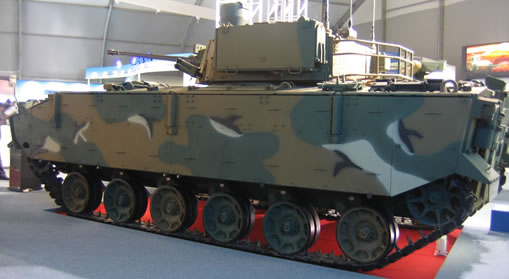 South Korea – First deliverys were completed in 2009 and by 2014 300 are in service with the Republic of Korea Army. Its beleived  that upto 900 could be ordered. Its aka K300 or XK21 KNIFV (Korea Next-generation Infantry Fighting Vehicle), K21 NIFV.

Exports – None yet, but Doosan are putting it on display at Aerospace & Defense Exhibitions.