In 2002 Lockheed Martin Insys was finally awarded the assessment-phase contract for LIMAWS-R, intended as the replacement for the M270 Multiple Launch Rocket System (MLRS) in medium brigades.

At approximately 9ton, 2 vehicles can be carried by a C-130J Hercules transport aircraft or one vehicle can be carried under-slung from a CH-47 Chinook helicopter. 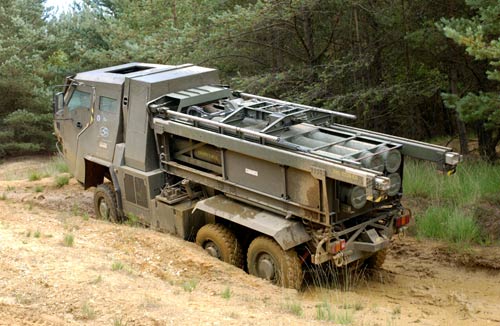 The chassis is a 6×4 developed by British firm Supercat Ltd, who manufacturer the British Armies successful Jackal. Not much else is known about the vehicles mobility, except that it has a range of 500km, uses an automatic transmission and Cummins engine.

The cab is air conditioned and fitted with a CAFU (chemical air filtration unit) system. It accommodates the three crew and their battlefield kit. The cab is fitted with armoured glazing and internal flash blinds, which are lowered before firing. The vehicle has fixing mounts for appliqué armour.

Lockheed provide the vehicle with the same Fire Control System (and a battlefield management system for receiving fire missions?) as used on the vehicles US Army counterpart, the HIMARS and the heavier multinational MLRS.

The Launcher contains one pod with 6 launching tubes which fire GPS-guided GMLRS rounds which are already in service on the MLRS systems deployed by the British Armies Royal Artillery. LIMAWS (R) is also capable of firing the long-range guided missile army tactical missile system (ATACMS) which has not been purchased by the UK The launcher can not traverse. The pod is reloaded via a hydraulic boom similar to the MLRS.

The trials included live firing trials, mobility across country, fording and air transportability and compatibility with the Chinook and Hercules. The firing trials were carried out at the QinetiQ Royal Artillery (Hebrides) missile range.

In May 2008, the UK Ministry of Defence announced the cancellation of the LIMAWS(R) programme.