The Polish Star 266 Military Truck Family was built by the former Fabryka Samochodów Ciężarowych “Star” Polish truck manufacturer. The Star 266 is designed for transporting cargo and personnel and entered production in 1973. It has since been developed in to a family of trucks to fulfil a number of roles.

CD-5 – military tank truck used for transport of liquid fuel by supply platoons of tank and mechanized battalions. It’s equipped with a 4500 litre tank and a pump. Also known as type 520.

Hibneryt – self-propelled anti-aircraft gun. A ZU-23-2 or ZUR-23-2S short-range air defence towed twin 23 mm auto cannon fitted onto the Star 266’s truck bed which has been modified and elevated to allow the AA gun to fire more freely. The wheels haven’t been removed which allows the crew to remove the auto cannon if need be which can be used as it originally was. The vehicle carries the ammo and equipment for the AA gun.

Hibneryt-KG – Hibneryt armed with ZUR-23-2KG Jodek-G short-range air defence towed twin 23 mm autocannon. It has a storage space for the GROM missiles as well as engine-generator for the AA gun. 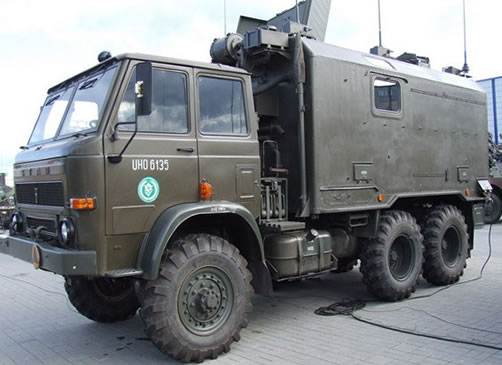 Star-266 BP-64 – military special transport vehicle used for transporting riverbank side pontoons of the PP-64 Wstęga pontoon bridge. Has an enlarged cabin with space for up to four soldiers.