The Romanian RN-94 6×6 wheeled Armoured Personnel Carrier was developed by Nurol Machinery and Industry Co Inc in Romania. The first prototype was completed in 1995. Three further prototypes were built, one of which was delivered to the Turkish Army for testing in 1997.

After being suitably impressed with the vehicle, a series of further trials were completed after this with a second delivery of 5 vehicles. Though the vehicle successfully passed these trials and was approved, Turkey eventually  ordered the Turkish PARS 6×6 & 8×8 Wheeled Family of Fighting Vehicles.In 2005 Bangladesh bought nine RN-94 in ambulance/APC and so far is the only known customer.

The x2 crew and x11 embarked troops are given all round protection from 7.62mm rounds due to the vehicles all welded steel construction. Prototypes built have successfully been fitted with various cupola’s mounting Machine Guns of up to 12.7mm calibre as well as one man turret supplied by French firm NEXTER mounting a 25mm chain gun. The vehicle has also been seen fitted with a 120mm mortar on a fully traversable turntable. 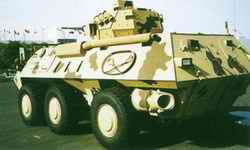 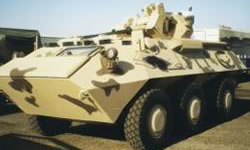 The x2 crew sit up front and have a number of periscopes as well hatches. The engine compartment is located behind them on the left and a connect passageway to the rear troop section is on the right. The troop section has a rear door and roof hatches as well firing ports and periscopes. The vehicle is fully amphibious and powered in the water by two rear water jets.