Russia had used (despite some teething problems) with a great level of success the Self-Propelled Anti-Aircraft vehicle family ZSU-23, however it lacked the teeth to penetrate the newer generation of aircraft the West was introducing.

Anti-Aircraft missile systems are successful in their role, however it can have draw backs, such as a slower engagement time, engaging lower flying aircraft and inability to be used in other roles (during the Chechen War’s the high elevation of the SP-AA vehicles meant they could attack embedded enemy troops in high level buildings in built up area’s that other vehicles couldn’t).

Developed in the 1970’s by the Russian KBP Instrument Design Bureau, the system was designated Tunguska and equipped with both dual 2A38 twin 30mm auto-cannons and 8 × 9M311 missile launchers, making the vehicle the most capable SPG-AA vehicle in the world.

It was officially accepted into service on 8 September 1982 and the initial version designated 2K22/2S6, with four missiles in the ready to fire position (two on each side). The Tunguska entered into limited service from 1984 when the first batteries were delivered to the army.

2K22: Original system, with 9M311 (3M87), 9M311K or 9M311-1 missiles. Some of these early versions of the “Tunguska” system were known as “Treugol’nik” (Russian Треугольник—triangle). This system is mounted on the 2S6 integrated air defence vehicle.

2K22M with 57E6: Complete upgrade of system with new 57E6 missile and new radar system, with detection range of 38 km and a tracking range of 30 km. Missile range is increased to 18 km.

A complete system or battery consists of six 2S6 combat vehicles armed with the 9M311 “Treugol’nik” (triangle) surface-to-air missile and two 2A38 30 mm cannon. These are accompanied by up to three 2F77 reload trucks.

The 2S6 combat vehicle uses the GM-352 and later GM-352M chassis developed and produced by the Minsk Tractor Plant (MTZ) which has six road wheels with hydro pneumatic suspension on each side, a drive sprocket at the rear and three return rollers. The driver sits in the front left of the hull, with a gas turbine APU to his right and the engine in the rear of the hull. The main engine is a 780hp V-46-4 turbocharged V-12 water cooled 4-cycle diesel.

The vehicle uses two radar’s, a parabolic E-band target acquisition radar (mounted on the rear top of the turret) and a turret front mounted J-band monopulse tracking radar. These systems have a detection range of around 18 km and can detect targets flying as low as 15m. The vehicle can fire on the move using its 30mm cannons, although it must be stationary to fire missiles, the maximum target speed can be up to 500m per sec.

A battery of six Tunguska can automatically receive fire control information via an encrypted radio link, this allows targets to be distributed between individual units from various radar systems/installations.

The two 30mm auto cannons fire either HE-T (High Explosive Tracer) and HE-I (High Explosive Incendiary) rounds at a combined rate of 3900 to 5000 rounds per minute. The cannons are fired alternatively, achieving bursts of between 83 and 250 rounds depending on the target. Their effective range is 0.2 to 4km, at an altitude of 4km. The cannons can be elevated and depressed to +87 to -10 degrees and as such can be used to engage ground as well as aerial targets.

The 2K22 can fire its cannons in two primary modes of operation, radar and optical, in radar mode the target tracking is fully automatic, with the guns aimed using data from the radar. In optical mode the gunner tracks the target through the 1A29 stabilized sight.

Four launchers are mounted on either side of the turret and fire the 9M311 missile family, which can engage targets at ranges of 2.4 to 8km at an altitude of 3.5km. The Tunguska-M1 uses the improved 9M311-M1 missile with an increased range of 10km. The complete missile is around 2.56m long with a weight of 57kg.

The gunner guides the missile on to its target via a ×8 magnification 1A29 stabilized sight. The tracking radar is used to send radio commands to the missile, making Tunguska a semi-automatic, radio command, with optical line of sight (SACLOS) system.

Once the missile is guided to within 5m of the target, an active laser or radio fuse is triggered blowing the rods in the warhead of the missile into fragments, which shred the skin of the enemy aircraft and hopefully strike an explosive element, which cooks off and destroys the aircraft. 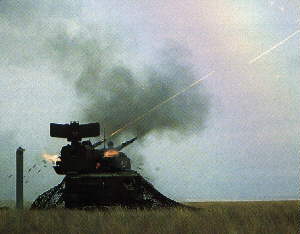 The 9K22 has been used in the 2008 South Ossetia war by Russian Ground Forces.