The Russian BTR-70 8×8 Wheeled Armoured Personnel Carrier was the successor to the BTR-60. Manufactured at the Gorkiy Automobile Plant in Russia and in Romania (up-graded & designated the TAB-77) it was an improved vehicle of the final production BTR-60PB. Its principal up-grades focused on the engine. It was equipped with two new ZMZ-49-05 V-8 petrol engines generating a small increase in hp. It also increased the power-to-weight ratio. With the BTR-70, one engine powers the 1st and 3rd wheels on both sides and the other engine powers the 2nd and 4th wheels on both sides, so should one engine break down, the vehicle could make it to safety under limited speed, unlike the BTR-60. The number of firing ports for the embarked infantry to fire from were increased, giving better protection to those as they disembarked. The vehicle is longer than its predecessor and made wider to giver better protection to the wheels.

The lay out of the vehicle is the commander & driver sit in the front, whilst an infantryman sits behind each of them using the newly added fire ports. Behind them is the turret which is operated by an infantryman. Behind that is the infantry compartment. 6 infantry then sat on 2 bench’s facing the hull so they could use the firing ports. They left the vehicle through the small hatch’s, one on each side on the hull located between the 2nd and 3rd wheel. The rear of the vehicle is were the engine is housed. The vehicle was amphibious and propulsion is via a single water jet at the rear of the vehicle. The only preparation is the activation of bilge pumps and a trim vane is erected at the front of the vehicle. Development of the vehicle started in 1971 and production in 1972, however it didn’t enter service until 1976 due to a fire at the factory which produced the new engines. It was first seen by the West at the 1980 November Moscow parade. In Afghanistan it proved vulnerable to attack from heavy MG fire and RPG-7’s. Field up-grades were completed which included additional armour and the main gun replaced with the AGS-17 grenade launcher.

The BTR-70V saw the replacement of the original turret with the BPU-1 turret (modified) fitted on the BTR-80 with 1PZ-2 sight. The turret was not fitted with the Tucha smoke grenade launchers. The BTR-70M was a further up-graded model with the turret, diesel engine and rear hull section of the BTR-80.

Known operators and vehicle numbers up to 2005

Combat history of the BTR-70 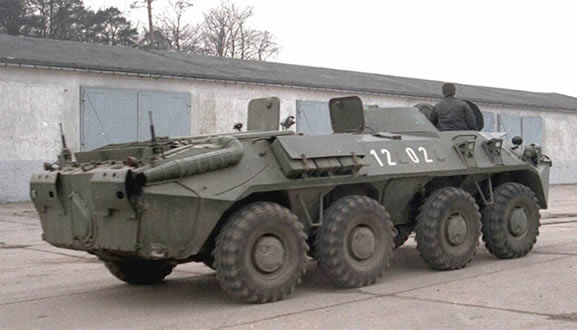 Variants from other countries