The Paramount Group is a group of internationally based companies with a focus on defence, internal security and correctional services. Their head office is based in South Africa.

The Paramount Group specialises in the manufacture of three armoured vehicles, the Matador MRAP, the Marauder MRAP, both were unveiled in 2008) and Mbombe 6×6 IFV, which was unveiled in 2010.

Paramount is currently exporting Matador and Marauder MRAP vehicle kits, to be assembled and manufactured in Azerbaijan’s.

The Paramount Group MBOMBE brochure describes the vehicle as –

MBOMBE is a high-mobility armoured infantry vehicle which can be easily adapted to fill a wide range of operational roles. It uses an innovative design and smart technology to reduce overall height while being the first vehicle of its type to offer all-round protection against RPG attack, against IEDs and against anti-tank mines as standard.

MBOMBE is a 6 x 6 vehicle able to carry considerable loads over all types of terrain without loss of mobility. It’s three axles provide excellent cross-country performance and make it a highly versatile platform which can be modified to meet the exacting requirements of military operations anywhere in the world. Depending on the role MBOMBE can be configured as an Armoured Personnel Carrier or as a highly effective Armoured Combat Vehicle mounting a heavy machine gun or autocannon.

It is suitable for use in both conventional and non-conventional war and counter-insurgency operations. It can be fitted with a Day/Night vision capability and sensors to extend the ranges of observation and engagement if required by the Customer.

The vehicle provides ample space for the driver, commander, gunner and 8 fully equipped infantrymen, but it can also be fitted out as a Command Vehicle, Ambulance or any other variant. This provides maximum commonality and reduces the overall cost of buying, owning and using MBOMBE in any army. 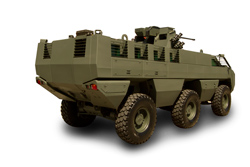 Even at its most basic the MBOMBE provides outstanding blast protection paired with excellent levels of protection against kinetic attack. The low silhouette offers a reduced target to enemy gunners and the armoured hull provides excellent stopping power against ballistic attack up to STANAG 4569 Level IV.

MBOMBE will withstand the explosion of 10kg TNT mine anywhere under its hull without rupture or under any wheel station. The anti-blast seats are designed to prevent damage to the crew from the extreme acceleration following an explosion beside or under the vehicle. Extra protection can be added in a modular manner to give added defence against specific threats if this is required in a particular area of operations.

Too many modern vehicles suffer from reduced survivability as a result of compromising their mobility with the addition of extra armour or heavy weapons. MBOMBE has been designed with sufficient power in hand such that it retains its outstanding mobility characteristics even when it is combat laden and configured as an AFV carrying a modern automatic cannon.

Commercial-off-the-shelf (COTS) automotive assemblies and components selected from volume manufacturers are used wherever possible on MBOMBE. This further reduces the cost of ownership and increases vehicle availability on the battlefield.