During the 1970’s the US Army ran a project called XM800 Armoured Reconnaissance Scout Vehicle for its Cavalry and to replace elements of the M113.

In 1972 both firms delivered their first prototypes. Both the XM800T and XM800W initially featured the same turret with the US-built version of the Hispano-Suiza HS.820 20mm chain-gun, as well as a M60-derived machine gun on a pintle mount. 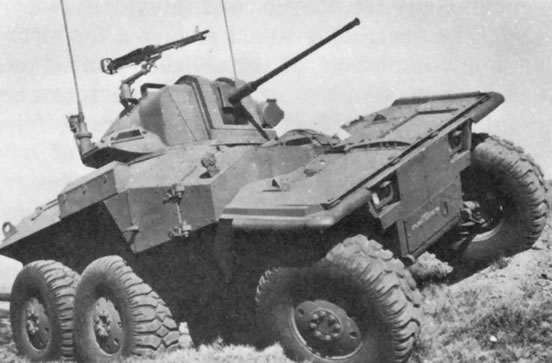 The XM800W was later equipped with a new turret design that had an upper cover that flipped forward to form a gun shield, or rearward to close up.

The resulting trials showed that both vehicles did not offer any improvements in mobility over the M113 as well as suffering other issues such as a lack of internal space for equipment.

The Army had also run another project called the MICV short for Mechanized Infantry Combat Vehicle, through out the 1960’s (MICV-65) and 1970’s (MICV-70) for a Infantry Fighting Vehicle to replace the M113.

Both projects ran their course, with neither XM800 vehicles being selected for production and service, which resulted in the project being cancelled in 1975. FMC’s MICV-70 prototype, the XM723, proved very capable so the role of Reconnaissance Scout Vehicle was rolled in to the MICV-70 project and the XM723 was renamed XM2 for the Infantry Fighting Vehicle and XM3 for the Cavalry Fighting Vehicle.

These vehicles evolved into the Bradley Fighting Vehicle and entered service with the US Army in 1981 as:

The M2 is the infantry version and primarily used to transport troops into battle, it has a crew of three and a six-man infantry squad and secondly to provide that squad with fire support.

The Bradley is still in US Army service and since been upgraded.