The US M41 Walker Bulldog Tank was the first post war light tank to enter production, replacing the M24 Chaffee, which had served in WW2.

Development started in 1947 under the designation T37. It was the first tank where the vehicle was built around the engine, rather that trying to later find a suitable engine for a completed design.

In 1948, three prototypes with varying main guns and turrets were tested and the second of the three’s turrets and 76mm main gun was selected and that vehicle was designated the T41.

However, the selected rangefinder and remote control MG had issues, so were dropped and a less complicated rangefinder was fitted. This vehicle was designated the T41A1.

The T41A1 entered production at the Cadillac’s GMC Cleveland Tank Plant in Ohio during mid 1951 as the M41 Little Bulldog. The name was soon changed to the M41 Walker Bulldog after General Walton Harris Walker, who died in the Korea War. When production ended in the late 50’s, 5500 had been built. It was eventually replaced in US service with the M551 Sheridan.

The vehicle used the Continental AOS 895-3 6-cylinder engine with Torsion bar suspension. This gave the vehicle a range of 161km and top road speed of 72km/h.

M41A1 – To increase the number of 76mm rounds carried from 57 to 65, the bulkier electrical turret drive was replaced with a smaller hydraulic one. (Ironically these systems are now gone back to electric ones in modern tanks, as the hydraulic lines show up as a thermal signature and when ruptured by enemy fire, can kill the crew).

M41A2 – New production A1’s with a new fuel injection system on the engine. 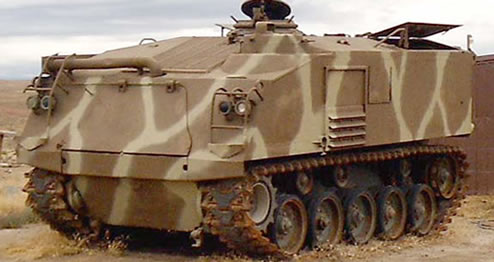 This was an APC used by the US and given to Belgium. It carried 24 soldiers and used some of the mechanical components of the M41.

The vehicle comprised of an M41 hull and a with different turret, which mounted twin 40mm M2A1 Bofor anti-aircraft guns, which had a rate of fire of 240 rounds per minute. 3700 were built for the Army, but replaced with a SAM vehicle in the early 60’s to engage jet engine planes. Some were recalled for the Vietnam War, but were fully retired from the National Guard in 1988.

Korean War – It entered service to late to offer a tactical advantage, but it proved a worth ground for ironing out operational issues.

Vietnam War – The vehicle was used by both US Forces and South Vietnamese Forces. The vehicle successfully withstood engagements with North Vietnamese, Russian supplied T-54 and PT-76 tanks. Both Russian tanks were defeated by the vehicles 76mm main gun.