The M4 Sherman was the successor to the M3 Lee/Grant Medium Tank and began life as the T6 Medium Tank.

It was built as a mock-up in April 1941 and was designed incorporating lessons learnt from the M3. There had been 4 major problems with the M3, these were; limited traverse for the main 75mm gun in the hull sponson, limited performance of the main gun, poor armoured protection and a high silhouette which made the tank an easy target. The T6 did, however, incorporate many of the M3’s components that were already tried and tested. These common components included the chassis, suspension, engine and transmission.

The biggest change was of course the new turret which housed the 75mm Dual Purpose main gun. The T6 also incorporated a radio in the turret, but retained the 5th crewman in the hull to operate the hull machine gun. Some slight changes were made to the T6 mock-up, including removing the high commander’s cupola and the removal of the side doors.

In September 1941 a pilot model was completed which incorporated a cast hull. The 2nd pilot model was built for the British and was named ‘Michael’ after Michael Dewar who led the British tank mission to the U.S. Both pilot models were armed with the M3 tank’s M2 75mm gun, as the M3 75mm gun wasn’t ready yet. The production tank was designated the M4 Medium Tank and 6 basic versions were built from 1942 to 1944. 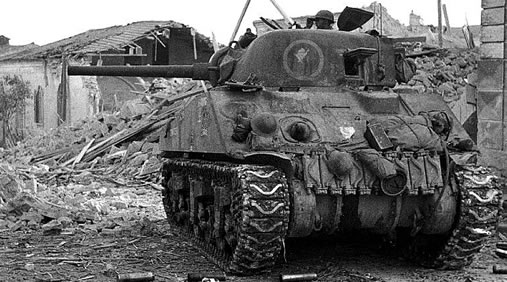 M4A1 – Same as M4 but with cast hull M3 type bogie units. Early models had the 3 piece bolted transmission cover, later models had the one piece cast cover. Later tanks also had the M3 75mm gun when it became available.

M4A3 – Welded hull, one piece cast transmission cover, Ford GAA petrol engine. The M4A3 was mainly kept for use by the U.S. Army and was also the most advanced version.

Another variant was the ‘Calliope’ multiple launch rocket system. This consisted of 60 x 107mm rocket tubes fitted in a frame mounted on top of the Sherman’s turret. The rockets had a range of 4,600 yards, but were highly inaccurate and tank crew grew to loath them due to the launchers being so cumbersome. It took 2 hours to reload the launcher after each salvo.

In its various different guises, the M4 ‘Sherman’ Medium Tank went on to become the main armament of the U.S. Armoured Divisions and was also sent in large numbers to other Allied nations, especially the British and Russians. It was, in fact, the British who took to naming their U.S. built tanks after U.S. generals, the Americans later copying this practise. The M4 was built in such large numbers that it played a huge role in the defeat of the Axis forces, in some ways it could almost be described as the single biggest factor in the ultimate Allied victory. The reason for this was the American motor industry was already set up for mass production and switched its efforts to tank production during WW2.

Although the M4 was built in such large numbers and was the equal to the German Panzer III and IV, it wasn’t without its problems. The biggest of these problems was its propensity for ‘Brewing Up’ when hit by enemy tank fire. This was caused by the dry ammunition stowage of the earlier models. When the tank was hit, hot shards of metal would enter the unprotected ammunition stowage and ignite the propellant charges, giving the crews very little time to escape before the tank exploded. Initial attempts to cope with this problem included welding additional armour plates to the outside of the tank, over the ammunition stowage positions. The problem wasn’t fully resolved until the introduction of wet ammunition stowage, positioned lower in the hull. Wet stowage involved surrounding the ammunition stowage tubes with a water jacket, so that if the hull was penetrated by enemy fire, and metal shards somehow got in to the stowage, the water jackets would fill the ammunition tube with liquid so that the propellant charge didn’t ignite.

Because of the problems with the M4 ‘Brewing Up’, the Sherman was given some rather cruel nicknames. The Axis forces called it the ‘Tommy Cooker’, whilst the Allies called it the ‘Ronson’ after the well known brand of cigarette lighter. ‘Ronson, lights up, first time, every time’.

The M4 first saw combat with the British during the 2nd Battle of El-Alamein and subsequently went on to serve on every front of the war and in every major campaign. Although the Allies built some tanks which were better than the M4, it was, nevertheless, the Allies most important tank because of being built in such large numbers.

In total, some 49,234 M4s of various were built during the war and went on to serve with different nations even after the war. Some nations, especially the newly created Israel, went on to upgrade there M4s well beyond the tank’s original capabilities.

No account of the M4 Sherman can go without some mention of the 79th Armoured Division and ‘Hobart’s Funnies’.

Amongst these Sherman adaptations were the:

The Sherman Crab was fitted with a large frame that had a drum between two arms at either side of the tank’s hull. Attached to this drum were numerous chains with balls on the ends. When the drum rotated, the balls would beat the ground in front of the tank, detonating any mine that lay in its path. 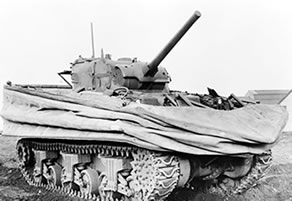 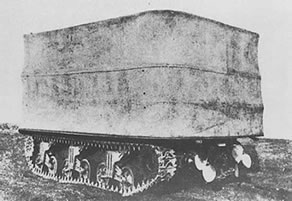 The Duplex Drive was developed by Hungarian born Nicholas Straussler. It consisted of 2 propellers driven by the tank’s tracks and a flotation screen that was raised to allow the tank to ‘swim’ through the water. When the tank reached dry land, the screen was lowered, allowing the tank to resume its conventional fighting role. 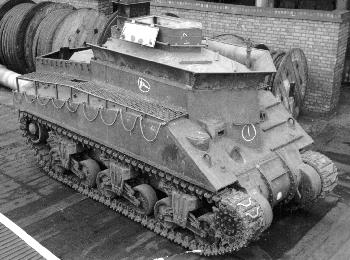 Although technically it wasn’t a ‘Funny’ the BARV, or Beach Armoured Recovery Vehicle was another variant used to good effect during the Normandy Landings, where it would push stranded or semi sunk Allied tanks up on to the beaches.