US Firm AV Technology had been a key player in the development and production of various successful Armoured Fighting Vehicle and turrets through out the 1980’s & 90’s.

The General Purpose Vehicles (GPV) company, based in New Haven, Michigan, developed a family of trucks and a family of armoured personnel carriers – 6×6 Commander / 8×8 Captain (short) / 8×8 Colonel (long) which was manufactured as the Turkish Pars 8×8.

In 2007 former managers and owners of these companies started up a new company called Advanced Defense Vehicle Systems. The later former companies had had experience working with the Kuwaiti Army in production of vehicles for them such as the Pandur I, so the transfer of key management personnel to the new company put them in good standing to work closely with the Kuwaiti Army in the development of the new “Ferrari” of the wheeled Armoured Fighting Vehicle market, the 6×6 Desert Chameleon.

Development started in 2007 and the final design confirmed in 2010 when Kuwait placed its first order for an undisclosed number of 6×6 vehicles. Some of these vehicles participated in the Kuwait National Day Parade on February 26th 2011 following delivery of first vehicles in the previous month.

The vehicle uses a bolt-on modular armour which can accommodate various ceramic compositions offering the operator different levels of protection. This is carried through to the vehicles IED protection as its v-shaped underbelly armour used to deflect the blast of an IED can be unbolted and removed from the bottom of the hull.

Its unclear if the vehicle has an NBC filtration system to protect the occupants from threats, but is most likely capable of having this installed. The vehicle has several smoke grenade launchers mounted on the turret to lay down a smoke screen.

The vehicle is fitted with an unmanned turret housing a fully stabilised (for firing on the move) chain gun, which can be up to 40mm calibre depending on the operators requirements. Kuwaiti vehicles are fitted with a 30mm Bushmaster, which is a larger calibre of those used on their British Desert Warrior tracked IFV’s.

The turret has a rather unique ball mounted on the turret. This is an unspecified advanced multi-sensor system used for targeting the enemy.

The 600hp engine and 6-speed automatic gearbox are supplied by the highly successful manufacturer Caterpillar Inc. The vehicle has a limited amphibious capability.

The vehicle also has a diesel Auxiliary Power Unit (APU) for electrical power generation and independent operation of the air-conditioning/heating, without the main engine running. Additionally, the APU can also start the main 600hp engine, should the batteries become completely discharged. 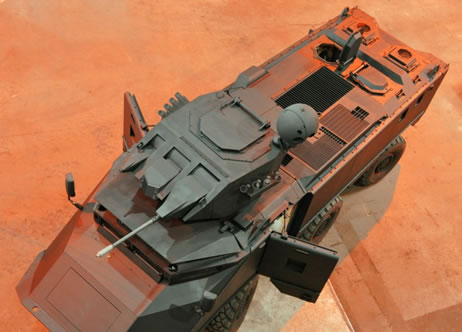 They have access via a rear ramp, 2 side doors near the front, and 4 top-hull hatches that can be used for observation or as emergency exits. A total of 6 firing ports and periscopes cover the vehicle’s rear arc, including 2 in the rear doors.

The 8×8 version for the export market was first revealed in April 2011. The 8×8 has a 90+% common parts for ease of service, and logistical support as the 6×6 as well as being fitted with the same protection, firepower and mobility features. It has an increased payload and troop carrying capability.