In the 1950’s a universal chassis was developed to mount different bore calibre artillery guns and a Field Artillery Ammunition Support Vehicle. It was used for two Self Propelled Guns, the M110 (which was a 203mm bore calibre, but shorter barrel) and the M107 175mm. Its barrel was much longer, but used the same gun mount and universal chassis.

The American M107 Self propelled Gun was manufactured by the Pacific Car and Foundry in 1962. At some point manufacturing was swapped over to BMY. Production ended in 1980, with a total of 524 built.

The American M107 Self propelled Gun requires a crew of 13! The commander, driver and three gunners ride on the M110 and subjected to the elements as it has no cab/turret. The remaining 8 ride on the M548 Field Artillery Ammunition Support Vehicle, with the rounds, fuel and charges.

A hydraulic spade at the rear of the vehicle is lowered in to position with the ground and continues to lower as the vehicle reveres, pushing the spade into the ground, so as to stabilize the vehicle whilst firing.

The main gun can be power elevated from -2 to +65 degree’s and power traversed 30 degree’s either left or right. A load assist device for loading the rounds in to the breech is mounted on the left rear of the vehicle.

The M437 High Explosive rounds have a range of up to 32.7km and former SRC developed round could reach 40km. 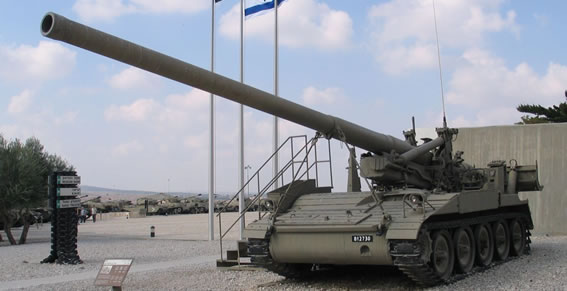 The Turkish Army – Still in service.

The Israeli Defence Force – Still in service. Has been used in local conflicts.

Islamic Republic of Iran Army – Status unknown, was fired in anger through out the Iran – Iraq War of 1980 to 1988.